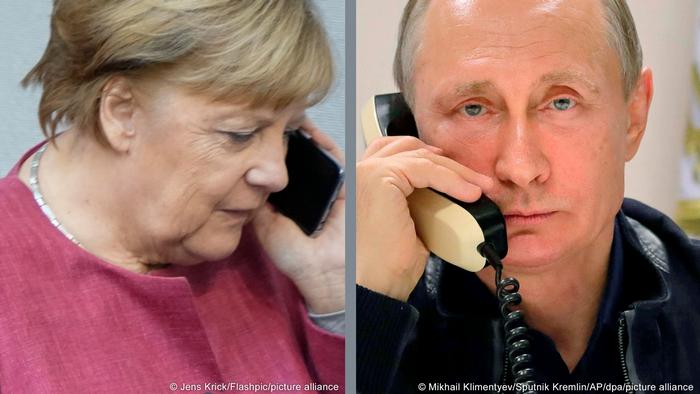 In a telephone call with Russian President Vladimir Putin on Wednesday, German Chancellor Angela Merkel decried the "instrumentalization of migrants" by Belarus as "inhumane and unacceptable."

She also asked the Russian leader to act on the matter, according to her spokesman, Steffen Seibert.

According to a statement from the Kremlin, Putin suggested discussing the issues through "direct contact between EU member states and Minsk."

The two leaders agreed to continue talking about the topic.

Separately, Russia's Foreign Minister Sergey Lavrov said that dialogue was the only option to settle the crisis.

"Belarus has already repeatedly suggested doing consultations at the border, to talk, to settle these issues based on international law," he told reporters.

And the Belarusian top diplomat, Vladimir Makei, said "Belarus is not the problem."

"The problem is the EU, because we see — and are convinced — that the EU has no strategy in relation to Belarus," he told reporters. "There should always exist the courage to talk, even in complex situations."


The call comes as the latest standoff between Poland and Belarus enters its third day, with large groups of migrants stuck on the border in dropping temperatures.

EU officials see it as a coordinated "hybrid attack" on the bloc organized by Belarus strongman Alexander Lukashenko and his regime in retaliation against sanctions. They say Belarus is flying migrants to the capital from abroad on special visas and taking them to the EU's doorstep.

On Tuesday night, Polish Prime Minister Mateusz Morawiecki accused Putin of being the real "mastermind" behind the crisis.

The Kremlin said the accusations were "absolutely irresponsible and unacceptable." Both Russia and Belarus have denied any wrongdoing. Instead, they claim Poland and the EU are causing the crisis by refusing the help potential asylum seekers.

What is happening at the border?


On Wednesday, Poland reported a surge in the attempts to breach the border, with its security forces pushing hundreds of migrants back to Belarus. At the same time, they said that some migrants managed to enter Polish territory.

Between 2,000 and 4,000 migrants, reported to be mostly Kurds, have set up a camp near the barrier after failing to break through the fence on Monday.

"The situation is not calm," Defense Minister Mariusz Blaszczak told Polish radio on Wednesday. "Now we are dealing with smaller groups, although numerous, which are simultaneously attacking the Polish border in several places," he said.

On Twitter, Blaszczak said there were now 15,000 soldiers deployed at the border, up from 10,000 from before the standoff.