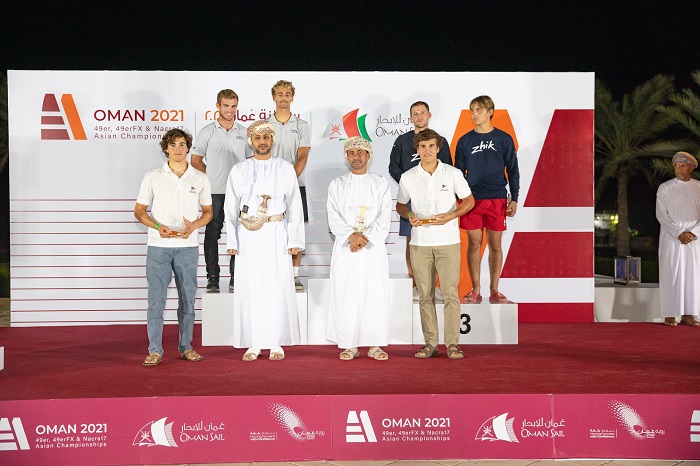 Odile Van Aanholt and Elise de Eujter of the Netherlands ended the tournament in top spot.

Muscat: The 2021 Asian 49er and 49er FX Championships concluded in dramatic fashion at Al-Mussanah with the podium positions decided in the very last race of the day.

After four days of competition, the Indian crew of KC Ganapathy and Varun Thakkar took the 49er gold ahead of Musab Al Hadi and Walid Al Kindi in second and Ahmed Al Hasani and Abdulrahman Al Mashari of Oman in third.

Akira Sakai and Russell Awylworth of Hong Kong, second place for most of the week, struggled in the final round of races and dropped from second to fourth.

In the overall front, Hernan Umpierre and Fernando Diz of Uruguay overhauled a large point gap with a display of near-perfect sailing to finish first, ahead of Andrew Mollerus and Ian Macdiarmid from the USA in second. Leaders going into the day, Danish duo Fredrik Rask and Jacob Precht, also found today difficult and dropped to third overall.

In the 49er FX class, Molly Highfield and Sandi Choi from Hong Kong won two of the three races on the final day to take the gold and finish second overall. Harshita Tomar and Sweta Shervegar of India claimed silver and the Omani team of Ibtisam Al Salmi and Marwa Al Khaifi took the bronze.

In the overall rankings, Odile Van Aanholt and Elise de Eujter of the Netherlands ended the tournament in top spot after leading all week, while Lara Granier and Amelie Riou of France finished narrowly missed out on second to Molly Highfield and Sandi Choi and had to settle for third place.

Rashid Al Kindi, Director of Sailing at Oman Sail, said, “This has been a great advertisement for Asian sailing and for Oman Sail’s programme. The entire fleet shone in the Mussanah sunshine this week. We’re delighted to welcome so many sailors to Oman for the championships, which provide vital time on the water for everyone, whether competing for the title, enjoying some winter training or preparing for the upcoming World Championships later this month, also held in Mussanah. The future of sailing in Asia is very promising in these three classes. We thank the competitors for making the journey to Oman and look forward to welcoming them all back here again in the future.”

The event was supported by national carrier Oman Air, OQ and the Barceló Mussanah Resort as official partners, and be’ah as environmental supporter. The National Mineral Water Company Salsabeel Water provided all essential water supplies for the event while the Royal Navy of Oman provided medical support throughout.

Many of the sailors will now remain in Mussanah ahead of the 49er and 49erFXWorld Championships taking place from 16-21st November.

Mussanah is also preparing to host the opening ceremony and first leg of the 11th edition of Sailing Arabia – The Tour on 24th November 2021 and the 50th Youth Sailing World Championships, the first time one of the most significant competitions in the sailing calendar has been held in the Asian federation, starting on 11th December 2021.