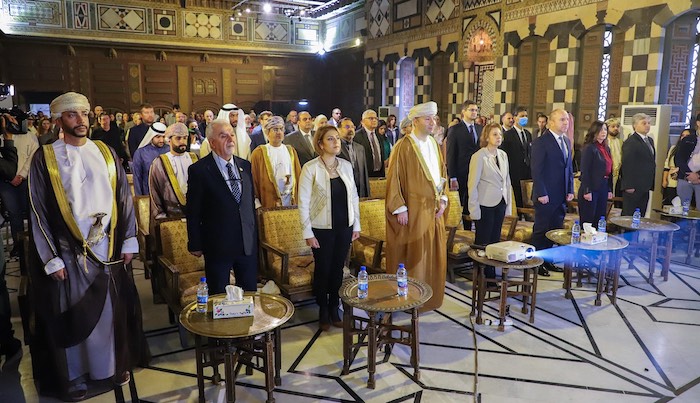 The exhibition came within the context of a memorandum of understanding (MoU), which was signed in 2019 in Muscat between the National Museum of Oman and the General Directorate of Antiquities and Museums of the Syrian Arab Republic. The National Museum of Syria manages 5 national museums.

The exhibition was inaugurated under the patronage of Dr. Lubanah Mshaweh, Minister of Culture of the Syrian Arabic Republic.

The objectives include regional and international participations in highlighting the civilisational, historical, cultural and scientific heritage of the Sultanate of Oman at all levels, with the aim of reaching a wide segment of the public worldwide.

The initiative is organised annually in one of the world’s prestigious museums.

Damascus is the third stop of the initiative, as the first initiative was launched at the ancient Hermitage Museum in the Russian Federation in 2018.

Crowning such cooperation, a hall specially dedicated to Oman was inaugurated in the Tsar Winter Palace in Saint Petersburg, Russia in 2020.

The second stop of this initiative was at the National Museum of Fine Arts in the Republic of Belarus in 2019, where the Sultanate of Oman was a Guest of Honour on the occasion of the 80th anniversary of the mentioned museum.

Negotiations are currently underway to host this initiative at the National Museum of Fine Arts in the city of Lyon, France, and National Historical Museum in Uzbekistan.

Jamal bin Hassan Al Moosawi, Secretary-General of the National Museum, said that the “Day of Oman” Exhibition is held under theme “Illuminations of Oman”.

He added that the exhibition sheds light on prominent stations in the history of Oman through the ages, since the dawn of the Magan civilization in the third millennium BC until the modern days.

This exhibition also takes us on a journey full of cultural diversity, as Omani craft industries are a tangible embodiment of the past and present, and a documentation of various lifestyles. It also expresses the cultural values ​​for which they are famous for, such as hospitality and generosity.

This exhibition contains a selection of traditional costumes, jewels, and other handicrafts; that meet the basic needs for survival, in addition to being one of the individual and collective priorities that reflect the manifestations of adornment and identity.

Emphasising the importance of the frankincense trade in the past in shaping human civilization throughout history, four archaeological sites have been included in the UNESCO World Heritage List, namely Al Baleed City, Khor Rori (Sumhuram), Shisr (Ubar), and Wadi Doukah.

The exhibition also highlights the features of beauty of the Arabic language.

The Omanis have been known for their eloquence since the pre-Islamic era, and that ingenuity and accuracy was reflected in writing the most beautiful poems and proverbs, which quoted from the Prophet Mohammad (PBUH) sayings, or from the poems of poets, or from the thoughts of scholars.

Jamal Hassan Al Moosawi, Secretary-General of the National Museum, further said, “The exhibition and events of “Day of Oman” in Damascus are the first initiative of its kind hosted by the sisterly Syrian Arab Republic since the years of the crisis. The Sultanate of Oman was chosen to obtain this honour is the best testimony of Oman’s trust and special status with the Syrian leadership and the brotherly Syrian people, as well as an embodiment of the depth of fraternal feelings rooted in history”.

He affirmed that organising the “Day of Oman” exhibition and its associating events is a continuation of promoting cooperation in the cultural and museum fields between the two countries. Such cooperation will introduce the Omani civilizational experience that deeply rooted in history, and highlight the common features that have brought us together since the Iron Age to the modern days.

Al Moosawi mentioned the project of preserving and conserving the damaged Syrian artefacts (100 coins) in Muscat, “These archaeological artefacts depict the human history and cultural heritage not only of Syria, but of all humanity. We handed over these artefacts to the Syrian side during this visit, to be at their disposal in accordance with the existing agreements between us.”

Sayyid Turki Mahmoud Al Busaidi, Ambassador of the Sultanate of Oman to the Syrian Arab Republic said: “The Day of Oman” exhibition and its associating events are an important addition on the path of cultural cooperation between the two brotherly countries”.

He affirmed the continuation of efforts to expand areas of cooperation between the Sultanate of Oman and Syria, to cover various economic and cultural fields.

He added that the inauguration of the Day of Oman exhibition and its events in Damascus coincides with the glorious fifty-first National Day of the Renaissance of Oman.

It represents a continuation of the strong relations between the two countries.

The bilateral relations receive a great attention and care from the His Majesty Sultan Haitham Bin Tarik and President Dr. Bashar Al Assad of the Syrian Arab Republic.

He hoped this event would be an opportunity for further cultural and museum cooperation, which will be positively reflected on the political and economic relations, as well as other spheres of cooperation between the Sultanate of Oman and Syria.

Within the framework of the official meeting between Dr. Lubanah Mshaweh, Minister of Culture of Syria and Jamal Hassan Al Moosawi, Secretary General of the National Museum, the Omani side handed over (100) Syrian antiquities that were damaged during the years of the crisis, to the Syrian side, after completing the process of preserving and conserving them in Muscat.

On the sidelines of the meeting, the two sides also signed an annex of an agreement to preserve and conserve the second batch of damaged Syrian holdings during the years of the crisis.

The delegation went on tour to the ancient city of Aleppo, which is listed in the UNESCO World Heritage List. The delegation was briefed on the restoration works of Beit Ajqabash.

The National Museum participated in November 2019 in the Culture Day in the Syrian Arab Republic. A session of artistic talks was held at the headquarters of the National Museum in Damascus; to discuss the technical and organisational aspects related to preservation and conservation of the damaged Syrian museum objects.