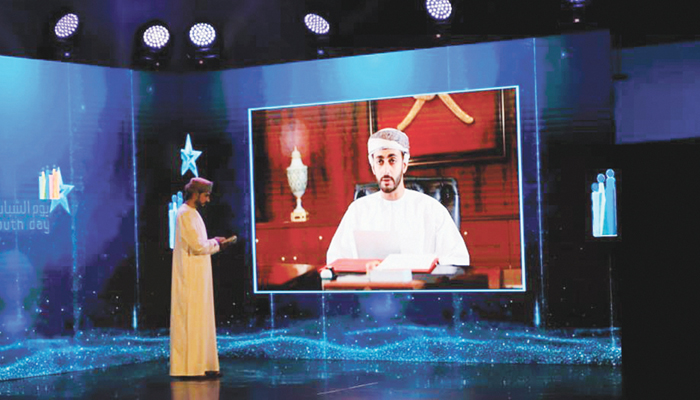 The Ministry of Culture, Sports and Youth held a virtual ceremony on Omani Youth Day.

Muscat: Coinciding with the celebrations of the Omani Youth Day (OYD), the Ministry of Culture, Sports and Youth organised a virtual ceremony to observe the event in Sohar on Tuesday.

During the ceremony, His Highness Sayyid Theyazin bin Haitham Al Said, Minister of Culture, Sports and Youth, gave a speech in which he reminded the directives of His Majesty Sultan Haitham Bin Tarik when His Majesty the Sultan had chaired the meeting of the Council of Ministers on 12 October.

The directives stressed the necessity for creation of mechanisms and channels for communicating with the youth to acquaint with their aspirations and ambitions and working on the same for the interest of the country’s growth and prosperity.

He said that the second edition of the Youth Excellence Award, supervised by the Ministry of Culture, Sports and Youth, motivates the Omani youth  for further innovation and creativity in the various fields.

He said that as part of the Ministry’s keenness for the youth innovations, the Ministry of Culture, Sports and Youth has launched the Smart Portal of the Ministry and provided it with the-state-of-the art technologies to make it the first destination for the talents and artists in the various sectors.

He said that the celebration of the Omani Youth Day aimed to evaluate the activities and programmes for the youth executed within the prescribed plans. To this end, we congratulate the youth winning the top places in all participations at the regional and international level, he added.

In his speech, His Highness Sayyid Theyazin praised the Omani youth who have set an example of sincerity, dedication and hard work, along with the role they played in supporting those affected during the Tropical Cyclone Shaheen.

He also praised their participations along with the other sectors in the Sultanate’s Pavilion at Expo 2020 Dubai, which he said aimed to showcase their achievements and expertise, worldwide.

On behalf of the Omani youth, Sayyid Theyazin extended his gratitude and thanks and that of the youth for the care and attention given by His Majesty Sultan Haitham Bin Tarik to them. He also pledged that they would continue to be loyal and sincere in serving the country in the various fields, under the wise leadership of His Majesty the Sultan and guided by His

Majesty’s directives for further progress and development of the country.