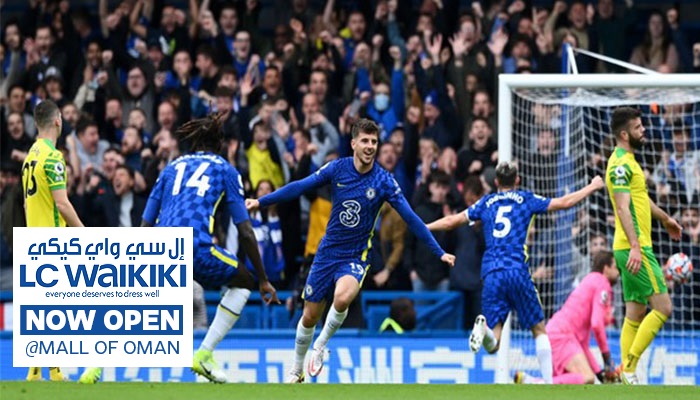 Max Aarons deflected Hudson-Odoi's shot into his own net to make it 5-0 before things got worse for Norwich.

Jorginho teed up Mount to open the scoring in the eighth minute. Chelsea doubled their lead through Callum Hudson-Odoi. They made it three before half-time when Reece James brilliantly dinked the ball in from Mount's pass. Chelsea added a fourth on 57 minutes, Ben Chilwell with his fourth goal in as many matches. Max Aarons deflected Hudson-Odoi's shot into his own net to make it 5-0 before things got worse for Norwich.

The league's bottom side ended the match a man down after Ben Gibson was shown a second yellow card before Chelsea added a sixth through Mount's retaken penalty. Mount completed his hat-trick in stoppage time to inflict the Canaries' joint-heaviest Premier League defeat and secure a third successive victory for Chelsea, taking them to 22 points which consolidated their position at the top of the table.

Elsewhere at the Amex Stadium, Phil Foden struck twice and set up another goal as Manchester City impressed in a 4-1 victory against Brighton & Hove Albion.

Ilkay Gundogan opened the scoring after being teed up by Bernardo Silva 13 minutes in. Foden then took the match away from Brighton with two goals in three minutes. Brighton put the champions on the back foot for most of the second half and were rewarded when Ederson fouled Enock Mwepu in the area.

Fellow substitute Alexis Mac Allister scored from the spot with nine minutes remaining. But Brighton's efforts fizzled out and Riyad Mahrez scored from Foden's pass in the final minute of stoppage time to add gloss to the scoreline.
City leapfrog Liverpool into second on 20 points, two behind Chelsea. Brighton stay fourth, five points further back.