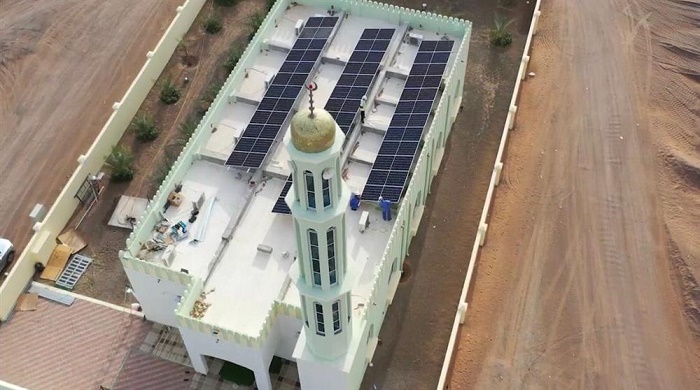 39 solar panels were installed on the mosque, along with a monitoring system. The mosque, which is spread over an area of 1,827 sq.m, and is built on 420 sq.m, receives 20 kilowatts of energy from the solar panels.

Muscat: A mosque in Bidiyah in North Sharqiyah has been fitted with solar panels, as part of efforts to switch a number of places of worship to renewable and sustainable sources of energy.

The Obaid bin Saeed Al Hajri Mosque is the first in the Sharqiyah region, and the second in Oman on which solar panels have been installed. The first is the Hassan bin Thabet Mosque in Muscat.

“The installation of the solar panels are part of the first phase of the Green Mosuqe initiative, an investment programme in the field of renewable energy that will help convert a number of mosques in Oman to run on renewable energy,” said Yousef bin Ali Al Harthy, CEO for Amanah Endowment Funds Management Company.

“Amanah assigned the transformation of this mosque into an environmentally friendly building powered by solar energy to an SME specialised in this field, as part of its investment initiative,” he told Oman News Agency. “We are looking to include more mosques in the coming period, as part of a strategic direction to open new areas for endowment investments through quality projects that achieve social and environmental benefits with rewarding returns and promising job opportunities for Omani youth.”

39 solar panels were installed on the mosque, along with a monitoring system. The mosque, which is spread over an area of 1,827 sq.m, and is built on 420 sq.m, receives 20 kilowatts of energy from the solar panels. Efforts are underway to fully reduce electricity consumption from conventional sources.

The first phase of the Green Mosque initiative is currently underway, with efforts to switch mosques to clean and renewable sources of energy ongoing in a number of places of worship of different dimension. This initiative comes in line with Oman Vision 2040, and the global trend towards establishing green buildings.

“This initiative is working to create a sustainable environment by adopting the approach of transition to a green economy in development projects, and to use alternative energy sources in a way that enhances social welfare and reduces spending on traditional energy solutions,” added Al Harthy.

“The construction of green buildings paves the way for modern industries based on technology and innovation, especially since the country has the ingredients to create an economy based on alternative energy,” he said. “Its strategic location and hot climate help it generate an abundant amount of solar energy.”

The Green Mosque programme aims to provide renewable energy to 100 mosques in its first phase of deployment and a total of 300 mosques across three stages, with investment totalling OMR5 million.

The alternative energy approach stems from Oman’s interest in achieving sustainability in clean energy instead of using fossil-fuel based energy, since under Oman Vision 2040, the country aims to produce 30 per cent of its electricity from solar energy, by that year.