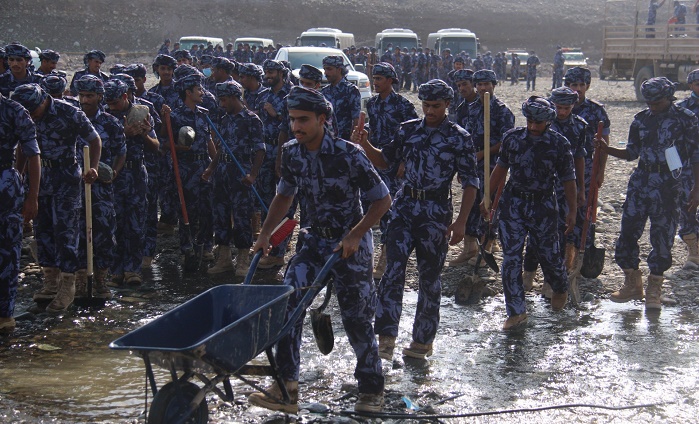 To ensure the continuity of recovery efforts, new divisions of the police Special Task Force in Sohar have joined the work in Suwaiq and Al Khabourah, said the Royal Oman Police.

Muscat: Royal Oman Police personnel from Sohar and Liwa have joined their comrades in areas such as Suwaiq and Khabourah that were affected by cyclone Shaheen, to assist in the rebuilding and reconstruction currently underway.

“A new force from the Special Task Force police unit from the wilayat of Liwa has arrived to enhance recovery efforts in Al Khabourah,” said the ROP in a statement. Their arrival comes a day after policemen were dispatched from Sohar. “To ensure the continuity of recovery efforts, new divisions of the police Special Task Force in Sohar have joined the work in Suwaiq and Al Khabourah,” added the Royal Oman Police.

Meanwhile, over 400 houses have been inspected by volunteer teams working to restore electricity in the areas affected by cyclone Shaheen, the National Committee for Emergency Management (NCEM) said. “Volunteer teams of the Weyakom Al Khair campaign continue to work in the field to help those affected by cyclone Shaheen. They are fixing the wiring, and attending to main switchboard malfunctions inside houses,” stated the NCEM.

The team includes a group of licenced technicians from among the Omani youth who are graduates of the Naqla programme, licensed technical volunteers, and a group of 50 electricians affiliated with the Engineering Services at the Ministry of Defence. Since October 11, more than 430 homes have been inspected as part of the initiative’s efforts, while electricity has been restored in some houses.

Electricity distribution companies in the affected areas have asked subscribers to contact them via the call centre to report malfunctions in the connections, and to not deal with them without a licensed electrician present.

Electricity companies are bearing all the costs involved in examining and repairing faults in electric lines and replacing the affected parts after cyclone Shaheen crippled the power supply in many areas. The workers were divided into groups in order to restore electricity in the affected houses.

In the meantime, the Royal Air Force of Oman continues to airlift generators into hard-to-access areas, to provide homes with power while electricity connectivity is being restored.

“To support the telecommunications sector, the Royal Air Force of Oman continues to transfer electric generators to the North Al Batinah governorate in order to speed up the restoration of normal life after cyclone Shaheen, in accordance with the plan of the Main Military Committee for Emergency Management,” the Ministry of Defence (MoD) said in a statement.