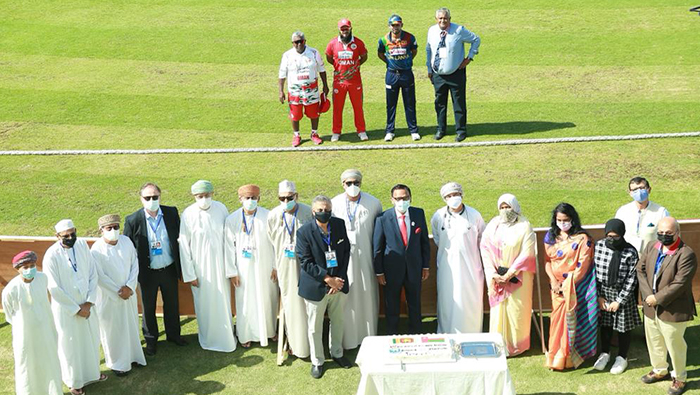 Muscat: Sri Lanka and Oman ODI cricket match began ahead of T20 World Cup with the commemoration of the 40th Anniversary of diplomatic relations between the two countries.

Sri Lankan and Omani national  cricket teams played their first ever ODI cricket ahead of the ICC T20 World Cup 2021 on October 7, 2021 at Al Amerat cricket ground in Muscat to mark the 40th anniversary of the establishment of diplomatic relations between Sri Lanka and Oman which coincidentally falls this year.

Sri Lanka's ambassador to Oman, Ameer Ajwad and the Chairman of Oman Cricket (OC), Pankaj Khimji, together with the members of Oman Cricket Board inaugurated the first international cricket match between the two teams by ceremonially cutting a cake to mark the occasion of the 40th anniversary of diplomatic relations between the two nations.

The ambassador presented 40th Anniversary memorial logo pin to the Chairman of Oman Cricket and the members of the Oman Cricket Board to mark this momentous occasion in the history of cricket of Sri Lanka and Oman.

Speaking on the occasion, Ambassador Ameer Ajwad said that the rise of Oman’s cricket and the amazing development of its cricket infrastructure is remarkable and that the cricket would play a significant role in further enhancing Sri Lanka and Oman relations into new areas of cooperation in the years ahead.