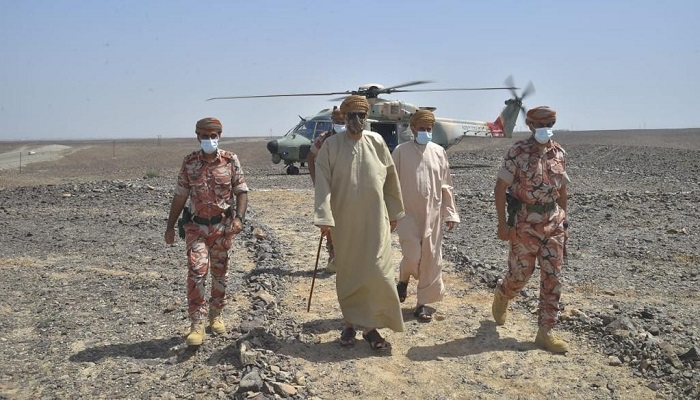 “His Highness Sayyid Shihab bin Tarik Al Said, Deputy Prime Minister for Defence Affairs, paid a field visit to affected areas in the governorates of North and South Al Batinah and a number of field deployment sites for the Sultan's Armed Forces, and other departments of the Ministry of Defence deployed in the two governorates, as part of the unrelenting national efforts to contain the effects of the tropical situation "Shaheen", Oman News Agency, ONA, said in a statement.

His Highness listened, during his visit to the Said bin Sultan Naval Base, to a briefing about the Royal Navy of Oman and the tasks and roles it plays in securing coastal areas affected by the tropical situation, the maritime safety movement, and the aspects of support it provides to all sectors concerned with search and rescue and medical transport.

At the headquarters of the Advanced Command of the National Centre for Emergency Management in the Wilayat of Suwaiq, His Highness listened to a briefing on the national efforts undertaken by the Main Military Committee in coordination and joint cooperation with the concerned authorities in accordance with their national plans.

In addition, the extent of the effects in the affected areas and the integrated roles in dealing with them, which contributes to restoring the situation to what it was before. His Highness, during his visit to the headquarters of the Military Sub-Committee for Emergency Situations Management in South Al Batinah Governorate, was briefed on the latest developments in the effects of the tropical situation.

His Highness also visited the headquarters of the Military Subcommittee in North Al Batinah Governorate and listen to a briefing on the efforts of the Sultan’s Armed Forces in coordination with the concerned authorities within the roles of the Main Military Committee’s plan for emergency management of the Sultan’s Armed Forces in the various locations of the forces deployment in the two governorates.