Tropical Storm Shaheen, here's what to expect in Oman 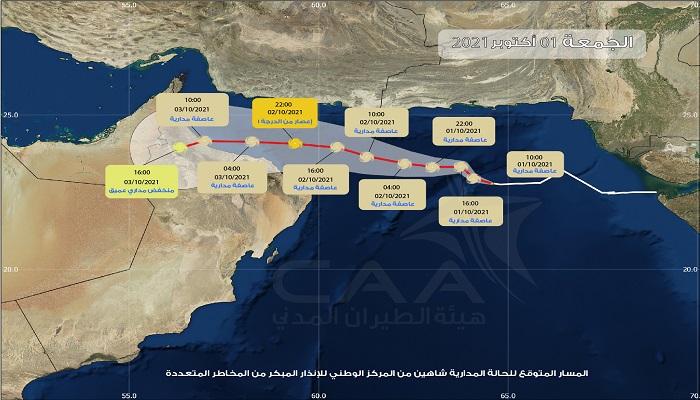 Muscat: Emergency relief teams are prepared to deal with Tropical Storm Shaheen, which could start affecting the Sultanate's weather from as early as Saturday.

He stressed: "The relief and shelter sector's supervisors in the governorates of North and South Al Batinah, Muscat, South Al Sharqiyah, and Al Buraimi have been directed to be more prepared as they could face the brunt of the storm and are coordinating with police commanders of these governorates."

"Shelters have been identified that are suitable for receiving citizens and residents moving them away from dangers such as flooded valley streams, high water levels or water breaches. The logistical support needed by the provincial leaders in terms of nutrition, drinking water, provision of supplies and blankets is being prepared."

He confirmed that these steps will be implemented by this evening, and there will be other steps, according to further developments.

The official added, "We initially prioritised North Al Batinah as the the expected amount of rain is between 150 and 600 mm, according to what was reported by meteorologists. Then the Governorate of Muscat, where the amount of rain will be within 200 mm, and after that the rest of the governorates which will be expected to rainfall ranging from  50-150 mm.”

“There will also be a possibility of sea water entering the land for several metres due to the high waves,” he added.

The official from the sector said that there was no shortage of supplies, including drinking water and that they were available at markets. "On Sunday concerned authorities from the Ministry of Commerce, Industry and Investment Promotion, as well as consumer protection will coordinate to provide materials and supplies and also to protect the market from monopoly and high prices, and there are teams working on this, therefore, we call on citizens and residents not to panic or worry about the lack of food or drinking water."

He called on citizens and residents to follow up and get news from official channels and the competent authorities and not to provoke panic and spread rumors through social media.

The Ministry of Heritage and Tourism has also asked hotel and tourist facility staff to direct tourists and guests to take precautions and not risk crossing valleys and to stay away from low lying areas and to not enter the sea.

CPA comes up with action plan to protect consumers

The Consumer Protection Authority (CPA) has confirmed its preparations for tropical cyclone Shaheen by forming teams to cover the markets in different governorates.

"The Consumer Protection Authority confirmed its preparations for the tropical situation (Shaheen) by developing a comprehensive action plan that includes many measures, including the formation of shift teams covering the markets of the various governorates on morning and evening, and a team to receive consumer complaints and follow up and communicate with owners of various commercial establishments to ensure the availability of goods and stability of markets and not to exploit the current conditions by some suppliers," CPA said in a statement.

His Excellency Sulayem bin Ali Al Hikmani, Chairman of the authority, said that contact was made with various different commercial institutions and suppliers in the governorates and they were told not to take advantage of the tropical situation (Shaheen) by raising prices, stressing that there is direct coordination with the sub-committees for emergency management in the governorates and the rest of the institutions to follow up on developments of the tropical situation and the urgent intervention required.

CPA also calls upon consumers to communicate with the authority in case they notice any abusive practices that harm their rights, through the consumer hotline, the authority's website and various social media channels.