Koeman's future on the line as Barca visit Atletico Madrid 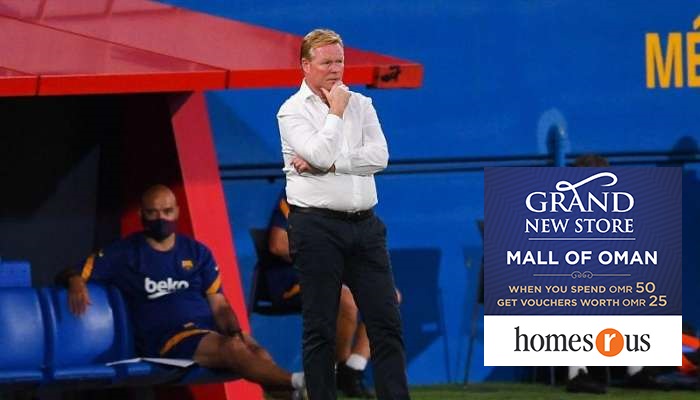 Madrid: FC Barcelona face a crucial game on Saturday when they travel to play Atletico Madrid in the eighth round of matches in La Liga.

Barca coach Ronald Koeman must have thought last weekend's 3-0 win at home to Levante had earned him some breathing space, but the feelgood factor lasted just three days and Barca's 3-0 humiliation away to Benfica in the Champions League on Wednesday night not only puts their qualification for the knockout stage of the competition at risk, but also leaves Koeman on the brink.

Barca president Joan Laporta was reportedly in meetings with other club directors until the early hours of Thursday morning, and if Koeman survives until Saturday, it will probably because there is no time to bring anyone else in, but one thing is clear - a defeat in the Wanda Metropolitano Stadium would certainly end the Dutchman's time in charge.

Barca will still be without Jordi Alba, Ousmane Dembele, Sergio Aguero and Martin Braithwaite for the game, and it will be interesting to see if Koeman risks Ansu Fati in the starting 11 after just two substitute appearances following his 11-month layoff.

Atletico Madrid have struggled to score goals in La Liga, but netted twice late on to win away to 10-man AC Milan on Tuesday night. It will have escaped nobody's notice that those goals were scored by former Barca duo Luis Suarez and Antoine Griezmann, with the Frenchman set to make his 400th league appearance against the club that allowed him to return to Atletico this summer.

The round of matches kicks off on Friday night when Athletic Bilbao striker Inaki Williams will set a new record of 203 consecutive league appearances when his club face Alaves in a Basque derby in San Mames.

There will only be a maximum 60 percent capacity in San Mames as the Basque regional government has decided to maintain some restrictions in grounds in the region, but in the rest of Spain, apart from Catalonia, capacity will return to 100 percent this weekend.

Saturday kicks off with a game between Osasuna and Rayo Vallecano, for whom Radamel Falcao has scored in his last three appearances to help the recently-promoted side to 13 points from the last 15.

Real Mallorca will fancy their chances of ending a four-game winless streak at home to Levante, who travel to the island looking for their first win of the season, while Cadiz look to bounce back from defeat to Rayo at home to a Valencia side without the suspended Maxi Gomez.

Consecutive wins have given a huge boost to Celta Vigo after their winless start to the campaign, and they visit a disciplined Elche led by former Celta boss Fran Escriba.

Real Madrid have had a difficult week after being held at home by Villarreal in La Liga before suffering a shock 2-1 Champions League defeat at home to Sheriff Tiraspol, but Carlo Ancelotti's side will be clear favorites on their visit to Espanyol.

Espanyol have won just three of their last 32 meetings against Real Madrid, and even though Wu Lei has delayed his return to China to play in the game, anything but an away win would be a major surprise.

Second-placed Real Sociedad visit Getafe who have begun the season with seven consecutive losses, and defeat number eight would see Michel Gonzalez sacked as coach. Robert Moreno also faces the axe from Granada unless his side can beat third-placed Sevilla.

Finally, Villarreal entertain Real Betis in an entertaining-looking clash between two in-form sides, although Villarreal need to recover from their cruel last-minute defeat to Manchester United on Wednesday. Enditem