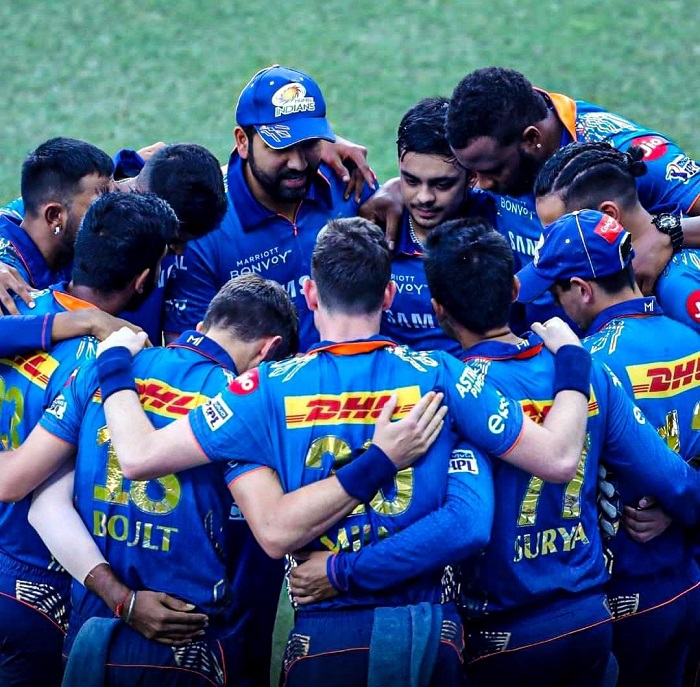 Mumbai Indians (MI) put on a clinical show with both bat and the ball.

Abu Dhabi: Mumbai Indians (MI) put on a clinical show with both bat and the ball as they defeated Punjab Kings (PBKS) by six wickets in their Indian Premier League (IPL) encounter at the Sheikh Zayed Stadium here on Tuesday.

MI chased the target of 136 in 19 overs with the loss of just 4 wickets. Hardik Pandya starred with the bat as all-rounder smashed unbeaten 40* to carry his team over the victory line. Saurabh Tiwary and Kieron Pollard also played important innings of 45 and 15* respectively for the Mumbai Indians (MI).

Chasing the target of 136, Mumbai had a horrible start as Rohit Sharma and Suryakumar Yadav were sent back to the pavilion in the 4th over of the innings by Ravi Bishnoi in two consecutive deliveries. MI skipper walked back after scoring 8 runs in 10 balls while Yadav was clean bowled for a first-ball duck.

Quinton de Kock was then joined by Saurabh Tiwary on the pitch and the duo stabilised the MI's ship in the middle overs. After the end of the first powerplay, the MI score read 30/2.

In the 10th over, Mohammad Shami struck to remove MI opener de Kock. The South-African batter was clean bowled by Shami for 27 off 29 balls. At the halfway mark in the innings, defending champions score read 62/3.

Hardik Panday then joined Saurabh Tiwary on the pitch and the pair seamlessly mixed caution with delightful strokeplay. In the 16th over, Saurabh Tiwary edged to KL Rahul on the bowling of Nathan Ellis. Tiwary walked back after scoring an important 45 off 37 balls.

Hardik Pandya along with Kieron Pollard gathered 11 runs in the 17th over of the match to ease some pressure on Mumbai. MI then needed 29 runs off 18 balls. Pollard then smashed a six and a four as the MI duo gathered 13 runs in the 18th over off Arshdeep Singh.

Bowling the penultimate over of the match, Shami conceded 17 runs as Pandya hammered six and two fours to seal the fate of the match in the MI's favour.

Put in to bat first, PBKS had an okayish start as the team gathered 38 runs in the first six with a loss of one wicket. Krunal Pandya sent Mandeep Singh back to the pavilion after trapping him in front of wickets for lbw in the last over of the powerplay. PBKS opener walked back after scoring 15 off 14 balls.

In the very next over, Kieron Pollard wreaked havoc on PBKS as the West Indian all-rounder removed compatriot Chris Gayle on one run and then dismissed KL Rahul in the same spell. PBKS captain walked back after scoring 21 off 22 balls.

Jasprit Bumrah made conditions worse for Punjab as he removed Nicholas Pooran in the following over. Aiden Markram was then joined by Deepak Hooda on the pitch and the pair started to stabilise the ship for the team in red. At the halfway mark in the innings, Punjab score read 62/4. The duo mixed caution with delightful strokeplay as Punjab crossed 100 runs mark in the 15th over of the innings.

Markram and Hooda gathered 15 runs in the 15th over off Trent Boult. In the very next over Rahul Chahar clean bowled dangerous-looking Markram for 42 off 29 balls.

Hooda (28) was dismissed by Bumrah in the penultimate over of the innings. After the final over, the PBKS score read 135/6.