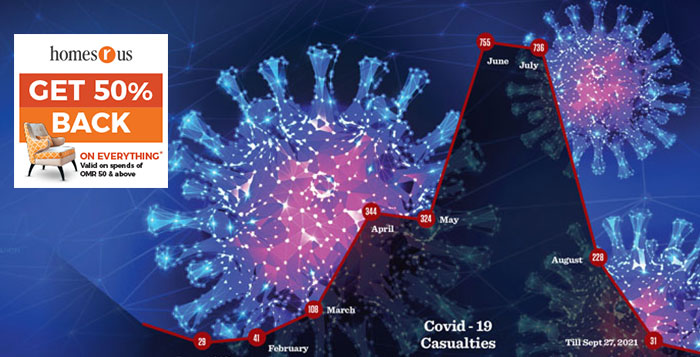 September has witnessed 11 days without deaths, including a full casualty free week.

Muscat: September 2021 has seen the maximum number of days on which no deaths from COVID-19 have been reported, according to an analyst in Oman.

Although 31 people have so far died from the COVID-19 in September, two more than in January of this year, September has also witnessed 11 days without deaths, including a full week during which no casualties were reported. Conversely, January 2021 had only four days with no deaths: the 11th, 12th, 13th and 20th.

“September 2021 remains the lowest in terms of the daily death rate, although it recorded 31 deaths because no deaths were recorded for 11 days, including seven consecutive days,” said Ibrahim Al Maimani, a social activist and data analyst, speaking exclusively to Times of Oman.

COVID deaths in Oman were comparatively low in January and February of this year, with 41 people dying in the second month of 2021, before rising to 108 in March and then tripling in April (344) and May (324).

This month, recoveries also outpaced new infections: “1,373 people tested positive from the beginning of the month until Sunday, at the rate of 51 infections a day,” explained Al Maimani.

“This is far lower compared to last month, when we had a daily rate of 185 new infections. Similarly, we have seen 5,013 people recover from the virus this September – an average of 186 recoveries a day.” >A4