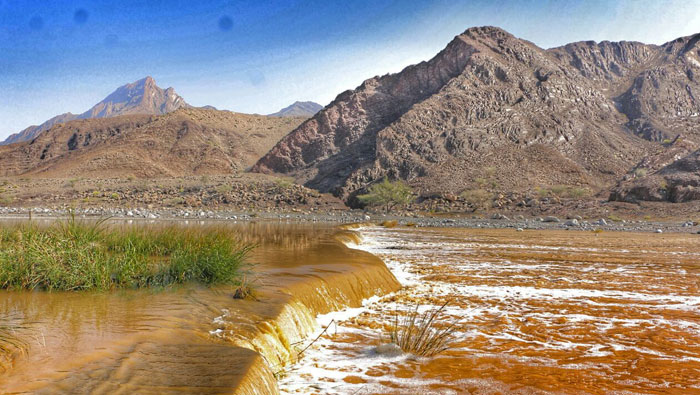 Al Kamil Wal Wafi: Located 40km away from the centre of the Wilayat of Al Kamil Wal Wafi in South A’Sharqiyah Sabt is very popular among tourists.
The Wilayat of Al Kamil Wal Wafi in the Governorate of South A'Sharqiyah has many different tourist sites.
It has beautiful sandy hills and golden dunes that surround it in the west, plains and nature reserves, most notably the Al Saleel and Hasina Reserves, a series of high mountains surround it from the north and east, as well as the large and beautiful water pools in the villages of Seeq, Sabt and Tahwa.
There are a tourist spots located in the wilaya is the village of Sabt, which is situated about 40 kilometres away from the centre of the wilaya. It is linked to the wilaya by a paved road. The village enjoys a geographical diversity in the confluence of mountains that surround the village in all directions, and running valleys. Water pools and the shade of the Sidr and Ghaf trees make the valley’s scenery even more attractive.
In the village of Sabt, there are oases of palm trees planted along the village achieving a beautiful harmony between the palm trees, valleys and mountainous rock formations.
There are many tourist places in the village of Sabt because of its varied climate and nature. Natural tourist sites, such as the Al Manah Park, are located at the top of the village. Located near the village entrance is the main Falaj, which is crowded with visitors, especially on weekends, during the rainy season, flooding of valleys and the formation of small waterfalls.
The village also has a beautiful place known as Al Manzaf. It is located between the villages of Seeq and Sabt. It enjoys privacy and independence as the mountains form a beautiful barrier that gives the place privacy and independence for beautiful times. It has become one of the most popular places for families as there are many palm trees that make the beautiful oasis a place where visitors can enjoy the shade, along with a view of the valley, which is often water-flooded, with small water pools act as delightful recreation for children.
Some of the other notable spots in the village of Sabt are the Marrakha Park; a wonderful park frequented by citizens and residents on the weekend and which is located at the village entrance, not far from the public highway leading to Muscat. It is a popular park for young people who like to enjoy swimming in its many water pools.
The village of Sabt contains Wadis of Mazra' and Al Siyaq, which are also frequented by tourists.
Abdullah bin Musallam al-Rasbi, member of the Majlis A'Shura told the Oman News Agency (ONA) that the beautiful intermingling between the elements of nature: the mountains, plains, valleys and trees has become an attractive draw for the beautiful village of Sabt, with tourists and visitors visiting regularly during vacations from inside and outside the Sultanate.
He added that the Sabt village has all the tourist components to attract tourists as it owns a wealth of palm trees, especially "Al Barni," which is in high demand in the local market for its tasty dates.
He also pointed out that the government, represented by the Ministry of Tourism, is working to implement all the needs of tourists, urging citizens, residents and tourists to pay attention to the beautiful place.