Chelsea move to top in the Premier League; De Gea the hero for Man Utd 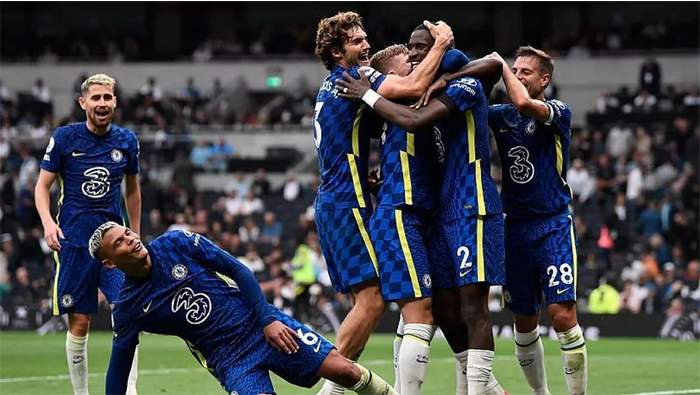 Chelsea went to the top of the table after a dominant display gave them a 3-0 win away to Tottenham.

Manchester United had fought back from a goal down after Said Benrahma had put West Ham ahead after 30 minutes.

Luke Shaw's handball deep into injury time gave West Ham the chance to level the score, but De Gea saved from Noble, who was brought on specifically to take the penalty.

Chelsea went to the top of the table after a dominant display gave them a 3-0 win away to Tottenham in the last game of the weekend.

Tottenham threw everything at Chelsea in a high-tempo first half, but all of their efforts were undone when Thiago Silva headed Chelsea ahead following a corner in the 49th minute.

N'Golo Kante celebrated his return from an ankle injury by hitting his side's second of the game in the 57th minute with a big deflection off Eric Dier, and Antonio Rudiger rounded off the win with a smart finish in injury time.

Earlier in the day Brighton confirmed their excellent start to the season with a 2-1 win over Leicester City thanks to a Neal Maupay penalty and Danny Welbeck's header.

Jamie Vardy got a goal back for Leicester on his 250th Premier League appearance, but the visitors were frustrated when Ademola Lookman and Wilfred Ndidi had goals ruled out for offside.

Sadio Mane's 100th goal for Liverpool helped his side to a 3-0 win at home to Crystal Palace that was tougher than the final score suggests.

Mane seized on a rebound following Mohamed Salah's header two minutes before halftime, but Liverpool had to wait until the 78th minute for their second of the game when Salah scored following a corner and Nabi Keita added a third in the last minute.

Manchester City disappointed in a 0-0 draw at home to Southampton in a game where the VAR played a key role in overturning a decision to give the visitors and penalty and send off Kyle Walker.

Martin Odegaard's brilliant free kick was enough to give Arsenal a narrow 1-0 win away to struggling Burnley, who have lost four of their first five games this season.

Burnley have one more point than Norwich, whose 3-1 defeat to Watford means they have lost all five games this season.

Dennis Bonaventura put Watford ahead in the 17th minute and although Teemu Pukki cancelled that goal out before halftime, two second half strikes from Ismaila Sarr gave the visitors all three points.

Aston Villa ended Everton's unbeaten start to the season with a 3-0 win at Villa Park with all the goals coming in a nine-minute spell midway through the second half.

Matty Cash opened the scoring in the 66th minute before a Lucas Digne own goal and Leon Bailey's volley assured the win.

Brentford continued their fine start to life in the Premier League with a 2-0 win away to Wolves thanks to goals from Ivan Toney and Bryam Mbuemo and they cruised home despite playing the last 25 minutes with 10 men after Shandon Baptiste's sending off.