Rise in call-outs for ambulance service in Oman 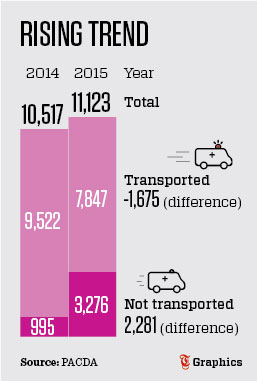 Muscat: Ambulance responses to emergencies rose in 2015, according to statistics from the Public Authority for Civil Defence and Ambulance (PACDA).
There has been a steady rise in the number of cases reported where the ambulance division at PACDA responded to 11,123 cases in 2015, compared with 10,517 in 2014. There were 9,889 cases in 2013, while in 2012, 9,230 cases were reported.
Officers had to tend to members of the public in 7,788 cases in 2011, while 6,309 cases were taken care of in 2010. However, not all victims and patients were transported to health facilities for treatment. 3,276 people were not transported at all, according to the data.
PACDA also provided an explanation on the data saying that sometimes the call for the ambulance gets cancelled during the response or the victim/patient is not found on site for the call and is transported by a civilian.
Victims sometimes refuse medical care even after several attempts are made to persuade them. At other times, first aid is provided at the site of the report, while some victims do not need medical care after paramedics assess the situation. 3,276 people were not transported by an ambulance, while 7,847 were.
According to data, PACDA recorded 8,250 trauma cases and 2,864 medical cases. “Trauma cases include road accidents, factory accidents, occupational injuries, fire injuries and household injuries, among others,” said the report.
**media[428738]**
Oman’s roads were ranked at the top for ambulance call-outs. Last year they responded to 7,645 cases. They attended cases in people’s homes 1,778 times. Prisons made up for the third largest area, where paramedics had to respond, with 433 cases recorded, while areas classified as “others” were 390.
Commercial areas followed with 304 cases reported. Some cases get priorities over others by factoring the risk an injury has on its victim. PACDA recorded 516 deaths, while 953 injuries were “immediate”; which means the patient must be transported to a health facility or hospital as fast as possible. 5,497 cases were recorded as “delayed,’ while 2,845 injuries were considered “minor.” Men made up 7,056 of the victims, while females accounted for 2,913.
Victims between the ages of 19 and 30 years made up for the majority of cases responded to at 4,336. In 2014, the 19 to 30 years age group also topped the list with 4,719 cases and PACDA officials explained that this is the age where people usually speed while driving and are more negligent.
The sense of responsibility is also lacking in some cases. Those aged between 31 and 50 years made up for 3,314 cases, followed by children aged less than seven years old at 1,364. PACDA ambulances responded impressively to 10,888 cases in less than 11 minutes, while 187 cases were responded to between 11 and 20 minutes, leaving only 48 cases that took more than 20 minutes.