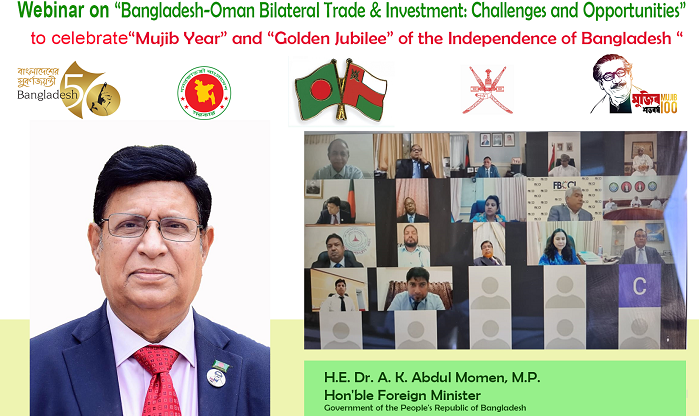 Muscat: In line with its mission to foster the development of trade and commercial activity between Bangladesh and Oman, Bangladesh Embassy in Muscat organised a webinar on 13 September 2021 as a part of the series of programmes undertaken to celebrate the Birth Centenary of the  Father of the Nation Bangabandhu Sheikh Mujibur Rahman and the Golden Jubilee of the Independence of the country.

Foreign Minister of Bangladesh Dr. A. K. Abdul Momen, M.P. spoke as the chief guest in the webinar along with Undersecretary for Diplomatic Affairs of the Foreign Ministry of Oman Sheikh Khalifa Alharthy. Chairman of Oman Chamber of Commerce & Industry (OCCI) Engineer Redha Juma Al Saleh and President of the Federation of Bangladesh Chambers of Commerce & Industry (FBCCI) Md. Jashim Uddin were also present among other guests. Bangladesh Ambassador to Oman  Mizanur Rahman conducted the proceedings of the webinar.

In his speech Foreign Minister Dr. Momen elaborated on the investment friendly environment that allows regional and global supply chain to develop and profit from. He also mentioned that Bangladesh-Oman bilateral relations has reached new heights covering many areas of mutual cooperation beyond the traditional manpower sector. He mentioned that Bangladesh is moving forward under the dynamic and visionary leadership of the Prime Minister Sheikh Hasina to build a ‘Shonar Bangla’ or Golden Bengal as envisioned by father of the nation Bangabandhu Sheikh Mujibur Rahman.

Sharing the Government’s prospective on development he highlighted on the latent potentials existing in the economic relations between the two countries, which are yet to be fully explored, and urged the two sides to work together to reap the full benefits of the brotherly relations.  He also mentioned that Oman could benefit from importing world class products, such as ready-made garments, ceramics, pharmaceuticals, leather and leather goods, frozen fish, jute and jute products and processed foods, from Bangladesh at a competitive price.

Undersecretary for Diplomatic Affairs Sheikh Khalifa Alharthy appreciated the role Bangladesh community is playing in the development of Oman and expressed Oman’s interest to expand the relation to areas such as bilateral trade and investment, food security and technology.

Ambassador Mizanur Rahman who hosted the programme mentioned that the Bangladesh Embassy in Oman was playing its part as a catalyst to forge bridges between the two countries and shifting the paradigm from labour intensive relations to a trade and investment-oriented partnership. He hoped that the webinar would provide fresh thoughts and suggestions as a guideline for proceeding in the future.

In his speech, Md. Jashim Uddin, the FBCCI President elaborated on the stimulus packages the Government of Bangladesh was offering and emphasised on undertaking a regular set of trade partnership including B-2-B meetings, annual trade fairs and annual trade meet to build a heritage of cooperation for targeted time-bound goals for renewed sustainable engagement between Bangladesh and Oman.

Chairman of OCCI Engineer Redha Juma Al Saleh underlined on the communication between the private sectors of the two countries and hoped that the webinar would facilitate the possibility of cooperation to raise the trade figure between the two countries and raising the number of joint investment projects. He also proposed for the visit of a delegation from Oman to Bangladesh at an opportune time next year.
Finally, a presentation titled “Bangladesh – A Land of Abundant Potential” was presented by Joint Secretary  Hasan Arif, the representative of Bangladesh Economic Zones Authority (BEZA).