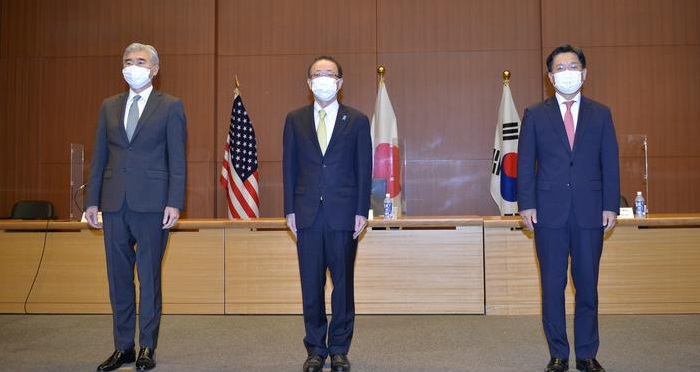 Senior envoys from Japan, the US and South Korea have held talks in Tokyo that focused on North Korea's missile and nuclear programs.The three diplomats agreed that "dialogue was urgent to accomplish the complete denuclearization of the Korean peninsula." according to South Korea's foreign ministry.

Kim also reaffirmed the US position to meet with Pyongyang with no preconditions attached to dialogue. "The United States has no hostile intent towards the DPRK," said Kim, adding "We hope that the DPRK will respond positively to our multiple offers to meet without preconditions."

The meeting follows announcements from North Korean state media that tests involving a new long-range missileover the weekend, had been successful.

Fears of a 'new threat'


There are concerns among Japanese officials that Pyongyang's latest test represents a new threat in the region.

On Monday, state-run Korean Central News Agency (KCNA) described the missile as a "strategic weapon of great significance." According to the news agency the missile has the capability to strike targets 1,500 kilometers (930 miles) away.

Its not yet clear how close North Korea is to being able to arm a missile with a nuclear warhead.

In March the reclusive state test fired two short-range ballistic missiles. The US did not express any particular concern in that instance and put it down to regular testing.