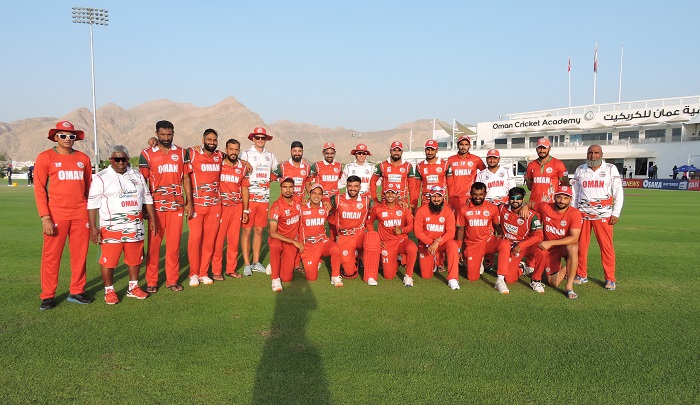 Oman team after winning the T20 series against Mumbai

MUSCAT: With nearly all its experienced players fit and firing, Oman is raring to go for the ICC T20 Cricket World Cup and star all-rounder Zeeshan Maqsood will lead the side to the game’s showpiece event scheduled to be held in Oman and UAE from October 17 to November 14.

Oman will be battling it out for a top two finish in the Group B that also has Bangladesh, Scotland and PNG.

Hosts Oman named the same squad for the first tri-series of the World Cricket league (WCL) Division 2 which will see them taking on Nepal and USA from September 13 to 20.

Keen to rely on the tried and tested to reach the Super 12, Oman picked most of its prominent players with promising southpaw Ayaan Khan being the only new selection. Aqib Ilyas will be the team’s vice-captain.

Coached by Sri Lankan great Duleep Mendis, Oman is raring to go for the big event next month.
“We have a few more games lined up which will help us fine tune to be ready for the first round of the ICC T20 World Cup. We have gone through a rigorous training programme and have played quite a few matches. The boys are fully prepared not only physically but mentally too, to face Bangladesh, Scotland and PNG in the first round,” he said.

Oman defeated Mumbai 2-1 in the three-match series but lost the four-game 50-over contest 3-1. Mendis says the series helped Oman immensely in identifying the faults and weaknesses.

“We wanted to play highly competitive cricket before the World Cup and that is why we invited Mumbai, which is a very strong team in India. Of course, they came here without some of their main stars but still that team is participating in the Ranji Trophy, India’s premier First Class tournament. The players who came to Oman were technically very sound and played very competitive cricket. Beating a side of that stature gave a lot of confidence to Oman team, which is exactly what we wanted. We wanted somebody to come and beat us so that we could know our weaknesses, so that we could correct them before the main tournaments,” he explained.

When asked if he agreed with the view that bowling was Oman’s main strength, the coach offered a unique insight into what led to the team’s success in recent years.

“Well, everyone says that bowling is our strength but I firmly believe what keeps us going is our team spirit. If we are strong in something it is not just the bowling department, it the togetherness. The team cares about each other and knows together they can do wonders,” he added.

Mendis did not agree to the view that Oman played T20 better than the one-dayers.

“I would say Oman plays both T20 and 50-over games quite well. Afterall, how can Oman be the current leader of the WCL Division 2 League after playing 12 matches against pretty good sides, specially teams like Scotland, Nepal and USA, if it wasn’t a good 50-over side? We could not have been the tournament leaders if we did not have a very good team for the one-dayers. I know the boys are playing well in the T20 games but they are equally good in the longer format. To me, they are good in both,” he concluded.
Oman Squad for ICC T20 World Cup and first WCL Division 2 Tri-series: Zeeshan Maqsood (captain), Aqib Ilyas (vice-captain), Jatinder Singh, Khawar Ali, Muhammed Nadeem, Ayaan Khan, Suraj Kumar, Sandeep Goud, Muhammed Naseem Khushi, Khurram Khan, Nester Dhamba, Sufyan Mahmood, Kaleemullah, Ahmed Fayyaz Butt and Bilal Khan.