Shardul's impact was massive, necessary to have fifth bowler who gives you comfort: Bumrah 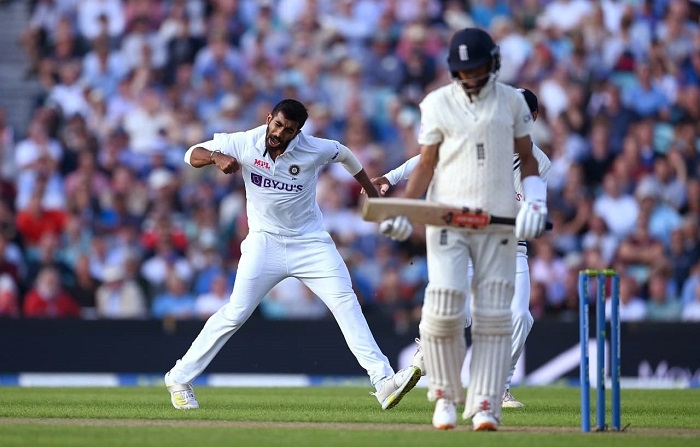 Bumrah also became the fastest Indian pacer to take 100 wickets in the longest format of the game.

London : India pacer Jasprit Bumrah hailed all-rounder Shardul Thakur's exploits in the Oval Test after the Virat Kohli-led side stormed to an emphatic 157-run win over England to take a 2-1 lead in the ongoing five-match series.

Indian bowlers delivered big time on the last day of the fourth Test at the Kennington Oval on Monday as the genius of mercurial Jasprit Bumrah, and all-round performance by Shardul Thakur in the match helped visitors in defeating England by 157 runs to gain a 2-1 in the five-match series. This is also India's first win in Oval in 50 years. "It is massive. Shardul Thakur played two crucial knocks that really helped us to gain momentum. Even in the first innings, he changed the momentum and it shifted towards us. We created a lot of pressure and we got two wickets in the evening session on the first day. And in the second innings, we had gotten to a reasonable score but he took the team to safety, and with the ball, he took the crucial wickets. His impact was massive, it is always necessary to have that fifth bowler who gives you that comfort and does the job for the team. Hopefully, he carries on," said Bumrah during a virtual press conference after the match concluded.

With the conditions good enough for batting, England openers got the hosts off to a decent start, with both scoring fifties, however, Shardul came into the attack and got rid of Burns in his first over of day 5. Shardul Thakur who was part of the Indian quartet in scoring more than 50 runs in the second innings, also dazzled with the ball as he sent back Joe Root to the pavilion later.

Hosts were still in the game until just after lunch on Day 5 when Jasprit Bumrah produced a glorious spell to give India a real shot at victory.

"So, when you are playing a Test or cricket, you do not realise how many overs you have bowled before, right now, the main important thing was to do the job for the team. I work really hard on my fitness because I want to play cricket for the longest period of time so I work hard in the gym and on my diet, I train really well. I have the ammunition in me so I know I can push when I am required to for the team. That was the thing I was focusing on, I was not focusing on the workload that has gone on, I wasn't thinking too far ahead so I didn't think about the next Test or the T20 World Cup because then you can be mentally tired. Right now, I have to do a job for the team and I was thinking just about that," said Bumrah.

"The mindset after the lunch break was that we needed to create a lot of pressure and we needed to start well. Because suddenly if you give away runs then the momentum goes away and suddenly you come under pressure and you do not want to play catch up in that game. So, I was in the mindset that if we start well, we can create pressure so we had a lot of belief and we wanted to run on that belief. The wicket was on the flatter side so it required a lot of patience and a lot of control, we wanted to give it all. The ball was reverse swinging a little bit," he added.

During the course of the match, Bumrah also became the fastest Indian pacer to take 100 wickets in the longest format of the game.

"We as a team always look to be in the present, sometimes things would go your way, and sometimes they won't. But as a team, we are focusing on how to get back in the game. We are looking to how to fight and get the team out of this situation. It is very important for the team to not lose faith because 5 days is a lot of cricket, the game can change anytime. We always wanted to be like that, we have a lot of belief in our unit and we know we can grab on to the opportunity whenever we can get it," said Bumrah.

"I do not think about the numbers, it is a joyous occasion that I have taken 100 wickets in Tests as I wanted to play the format for a very long time," he added