India beat England by 157 runs at the Kennington Oval 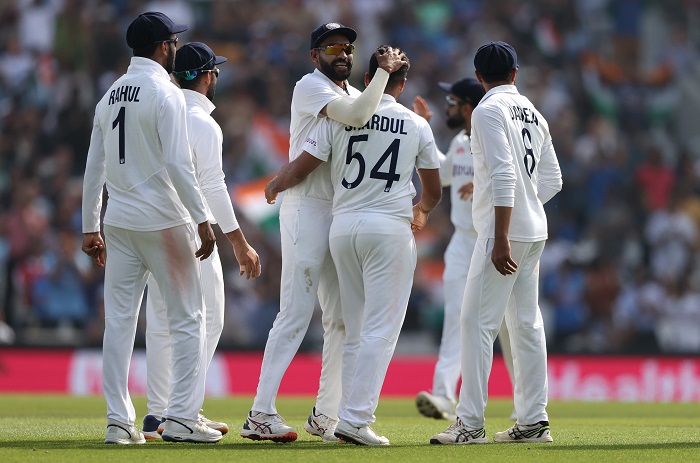 Shardul Thakur picks up the wicket of Joe Root.

London: Indian bowlers delivered big time on the last day of the fourth Test at the Kensington Oval on Monday as the genius of mercurial Jasprit Bumrah, and all-round performance by Shardul Thakur in the match helped visitors in defeating England by 157 runs to gain an unassailable lead of 2-1 in the series. This is also India’s first win in Oval in 50 years.

With the conditions good enough for batting, England openers got the hosts off to a decent start, with both scoring fifties, however, Shardul came into the attack and got rid of Burns in his first over of day 5. Shardul Thakur who was part of the Indian quartet in scoring more than 50 runs in the second innings, again dazzled as he sent back Joe Root to the pavilion. Hosts were still in the game until just after lunch on Day 5 when Jasprit Bumrah produced a glorious spell to give India a real shot at victory.

At Tea, England’s score read 193/8 going into the last session of the match with two wickets in the bag. England lost 6 for 62 in 25.1 overs during the afternoon session. Just after the lunch, it was Jadeja who pushed hosts onto the back foot as he took the priced scalp of Hameed by beating him and knocking the top of off stump. The England batsman struggled to score all morning, adding just 19 runs to his overnight score in 102 balls.

Ollie Pope, who came into bat at five, failed to leave a mark as he became the 100th wicket of Jasprit Bumrah in Test cricket after scoring two runs.

The Indian bowler cleaned Pope on an inswinging delivery to leave the hosts in deep trouble. Bumrah became the fastest Indian seamer to reach the landmark of 100 Test wickets in his 24th Test - Kapil Dev previously led the way, reaching it in his 25th.

In his next over Bumrah struck again as he crashed the 142 kph reverse inswinging yorker into the base of the stumps to send Jonny Bairstow back into the pavilion for a duck.

Moeen Ali soon followed Bairstow into the pavilion for a duck as he threw his wicket to Jadeja for the second time in the match. England all-rounder pushed forward tentatively and gave an inside edge to Suryakumar Yadav at short leg.

England skipper Joe Root tried to hold the charge against Indian bowlers with Chris Woakes on another side with the duo passing the 30 run mark but Thakur who returned to bowling on 81st over struck immediately with the old ball to break the stand.

With the back of a length delivery, Root looked to run it down to the third man, but it got an inside edge of him and crashed into the leg stump. Root went back after scoring 36.

Just before Tea, Umesh Yadav got the key wicket of Woakes, caught by one of the two fielders catching at short midwicket. Umesh again dazzled as with the fourth delivery with the new ball, he sent Overton packing in the third session and soon Anderson.

India now leads the series 2-1 and will go to Manchester full of confidence. -ANI