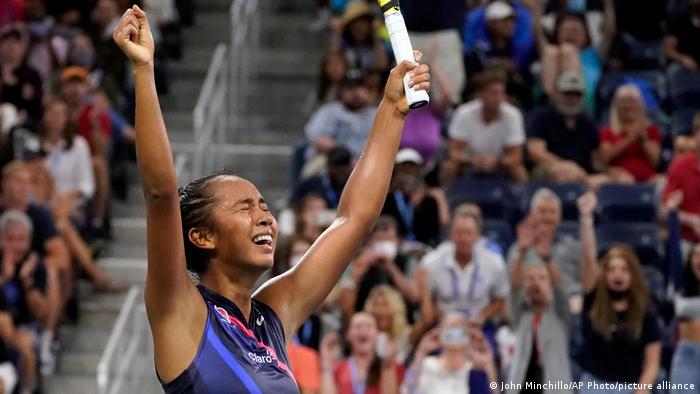 Fernandez, who had already beaten Osaka in the previous round, won in three sets

The Canadian, who shocked defending champion Naomi Osaka in the previous round, overcame her German opponent despite losing the first set, and being a break of serve down in the second.

Kerber, who won the title at Flushing Meadows in 2016, began the match in style, winning the first set 6-4 with a backhand, cross-court winner.

And the three-time Grand Slam winner seemed set for a comfortable straight sets victory in New York, as she led 4-2 in the second.

However, her opponent, who is almost 15 years her junior, had other ideas. Fernandez managed to fight her way back into the set with some shots of unerring quality, as well as showing unbreakable spirit, to level the match up after a tense tie break.

The third set looked on course to go all the way, as the two players shared the first four games. However, when it mattered most, Fernandez, belying her tender age, stepped up to the plate, winning five games in a row.

Fernandez will now play word number three Elina Svitolina, who beat Simona Halep earlier on Sunday, for a place in the semi-finals.

The 34-year-old Serbian recovered from a slow start before he won rest of the game smoothly.

"I do not think I started off very well," Djokovic said. "I was too passive. He was dictating the play. I was still trying to find the tempo. It took me a little bit of time to adjust to his game."

Although the world No.1 beat Kei Nishikori for 17 consecutive times, the Serbian also speak highly of his opponent.

"Big credit to Kei, who played on a very high level," Djokovic said. "He was quick. It was tough. Great fight from him."