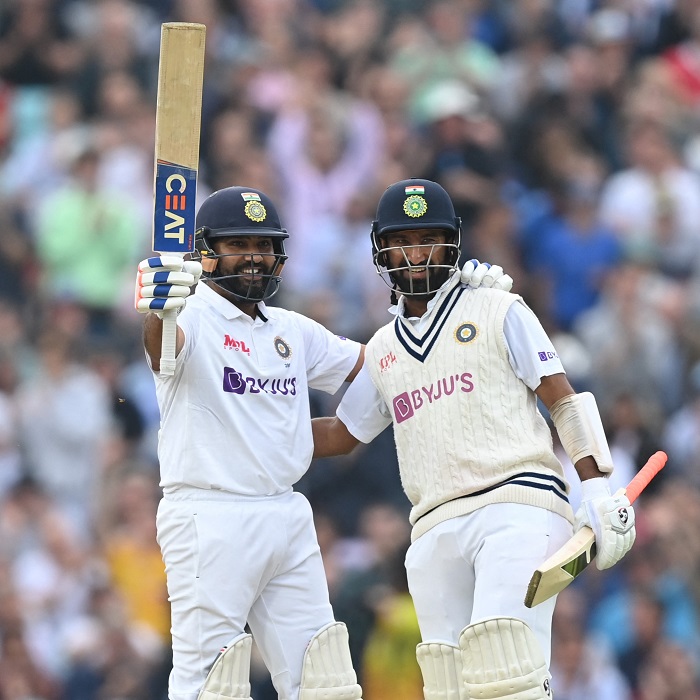 London:  Rohit Sharma and Cheteshwar Pujara displayed clinical batting as India lost no wickets and the side reached a position of strength in the second session of the third day of the ongoing fourth Test against England here at the Kennington Oval on Saturday.

At tea, India's score read 199/1 -- a lead of 100 runs with nine wickets in the bag in the second essay. For the visitors, Rohit (103*) and Pujara (48*) are at the crease. Resuming the second session at 108/1, Rohit and Pujara mixed caution with aggression and the duo saw out spell after spell, taking India to a position of safety. Rohit finally brought up his century in the 63rd over of the innings by hitting a six off the bowling of Moeen Ali. This was Rohit's first century outside Asia.

Pujara provided perfect support to Rohit at the other end and the duo ensured that the visitors do not lose any more wickets before the break. Pujara and Rohit have so far extended their partnership to 116 runs.

Earlier, KL Rahul might have lost his wicket to James Anderson, but Rohit Sharma and Cheteshwar Pujara ensured India did not fall behind in the opening session. At lunch, India's score read 108/1 -- a lead of 9 runs with nine wickets in the bag in the second essay. For the visitors, Rohit (47*) and Pujara (14*) are at the crease.

Resuming at 43/0, Rahul and Rohit were looking rock solid and the duo saw out the first hour with both of them looking set for a big one. However, against the run of play, Rahul (46) lost his wicket to Anderson in the 34th over and the 83-run opening stand came to an end. Anderson thought that Rahul was caught behind, but the on-field umpire did not think so. England opted for a review and the replays clearly indicated that there was a huge spike and (46) Rahul had to depart.

Pujara then joined Rohit in the middle and both batters saw out probing spells of English bowlers and India entered the lunch interval with nine wickets in hand. On Friday, India had bowled out England for 290 and as a result, conceded a lead of 99 runs. For England, Ollie Pope and Chris Woakes registered half-centuries.