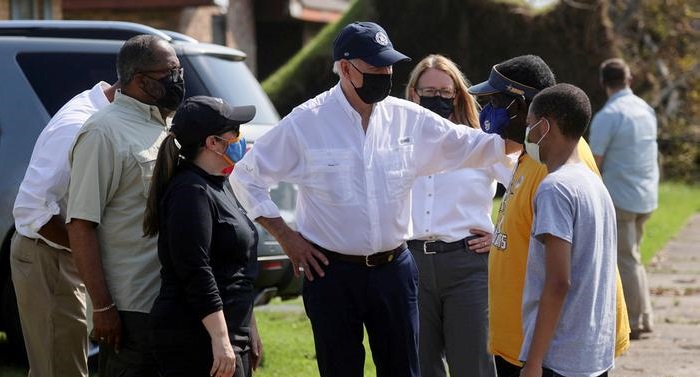 US President Joe Biden vowed to support victims of Hurricane Ida on Friday as he toured the hardest-hit areas of Lousiana, where at least nine people died.

The storm left 1 million people without power and nearly 600,000 without water. It claimed dozens of lives across the US Gulf Coast and northeast.

What did Biden say?


"I know you're hurting," said Biden after he saw the destruction of homes with Lousiana Governor John Bel Edwards in LaPlace, one of the worst hit neighborhoods, 35 miles (56 kilometers) west of New Orleans.

"The storm has been incredible, not only here but all over the East Coast," said Biden, fresh from dealing with the fallout from the hasty retreat from Kabul.

"I know you've got to be frustrated about the restoration of power," he added, assuring government technicians were working with utility companies to get electricity flowing for affected communities.

Utility officials said New Orleans is likely to get power back by Wednesday after the storm knocked out electricity to more than 1 million people.

"I promise we're going to have your back," he reassured residents.

How badly was the US hit?


The fifth most powerful hurricane to hit the US came ashore in Louisiana on Sunday, striking the Gulf Coast and tearing through the East Coast.

Hurricane Ida killed at least 14 people across Louisiana, Alabama and Mississippi, and caused billions of dollars in infrastructure and building damage.

Experts have once again blamed climate change for the storm's intensity.

On Wednesday, Ida caused flooding in New York, New Jersey and surrounding areas. The death toll on the East Coast rose to at least 46, with another six reported missing in New Jersey.

New Jersey Governor Phil Murphy told NBC News Friday his state was "still not out of the woods" as cleaning up "may be a long road."

On Thursday, Biden told the people of the northeast that "the nation is here to help," as the Federal Emergency Management Agency (FEMA) worked with the National Guard and the Red Cross to overcome flood damage and destruction.

Biden used the destruction of electricity pylons to illustrate how his multi-billion dollar plan to put power cables underground could safeguard infrastructural costs in the long run.

"It seems to me we can save a whole lot of money, a whole lot of pain for our constituents, if we build back, rebuild it back in a better way,'' Biden said.