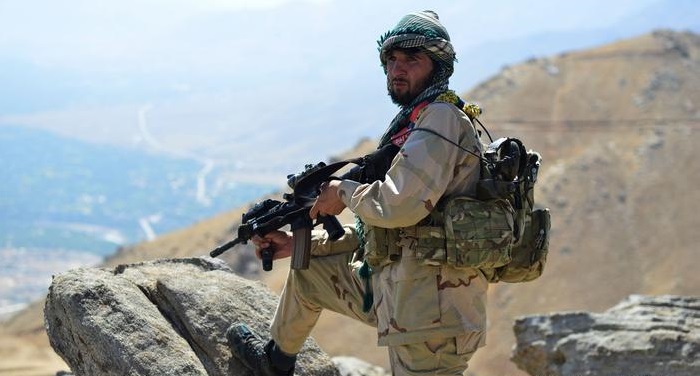 The leader of a resistance faction fighting the Taliban in Afghanistan's last holdout province announced Saturday that they would continue fighting.

The statement by the head of the National Resistance Front of Afghanistan Ahmad Massoud came in apparent response to unconfirmed reports that Panjshir — north of the capital Kabul — had fallen to the hardline Islamists.

The Taliban also claim they are on the verge of forming a new government after seizing Kabul on August 15.

What did Ahmad Massoud say?


"We will never give up the fight for God, freedom and justice," Massoud, the leader of the National Resistance Front of Afghanistan, wrote on Facebook.

"The fight, like Panjshir, who has stood strong until now and ... shows that people have not given up on their demands and fight for the truth," he added.

"Our people will never get tired of trusting God and will move forward to building a prosperous, free and independent Afghanistan."

Massoud is the son of Ahmad Shah Massoud, a major opposition figure against the Taliban's previous regime, who was killed in a suicide bombing just two days before the September 11, 2001 attacks on the United States.

Has Panjshir fallen to the Taliban?


Sources close to the Taliban claimed Friday that they had seized the Panjshir Valley, but it was not immediately possible to verify the claim.

The Panjshir Valley "has not been breached," Nazary said from a location in the US. "The Taliban are facing fierce resistance."

Franz Marty, a journalist in Kabul, told DW on said Saturday the Taliban had made no official declaration of victory, although there was some celebratory gunfire in Kabul.

"No one has confirmed this officially and resistance leaders have denied it," Marty said. "It's difficult to confirm the situation inside the valley because they have switched off the phone networks, so my contacts are unreachable."

Who is the National Resistance Front of Afghanistan?


The group is an alliance of anti-Taliban fighters loyal to the ousted government run out by the Islamist group nearly three weeks ago.

The faction has de-facto control over Panjshir, the only province in Afghanistan that is not under Taliban rule.

The group is engaged in fierce fighting to retain control of the province.

Afghanistan's TOLO TV cited ousted Afghan vice president Amrullah Saleh, who has claimed the role of acting president, as saying the fighting in recent days had been intense and fighters on both sides had died.

Meanwhile, brief talks to try and find a peaceful solution have failed.

The Taliban has offered Massoud a position within their government, but he has rejected it, according to Fahim Dashti, a spokesman for the resistance organization.

The group is demanding the fair political participation of all ethnic groups as well as the protection of women's rights, freedom of speech, and elections.

When will the Taliban announce a new government?


The Taliban are due to form a government within days, perhaps as early as this weekend.

The Islamists face the enormous challenge of shifting gears from insurgents to a governing power of a war-ravaged country that is heavily reliant on international aid.

Qatar's ambassador to Afghanistan said Saturday that Kabul airport was able to be reopened for international assistance, according to Doha-based news channel Al Jazeera.

The Taliban have promised an inclusive government that represents Afghanistan's complex ethnic makeup and under a less extreme form of Islam than when they last ruled the country from 1996 to 2001.

Taliban leaders have repeatedly declared that they will not carry out revenge attacks on opponents and that women will have access to education and some employment.

But many Afghans are deeply skeptical and fear a rollback of rights gained over the last two decades.