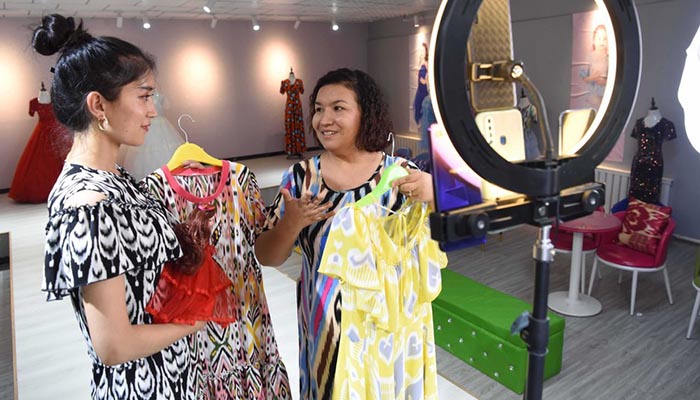 Beijing: People's way of living has been turning increasingly digital, and the prolonged COVID-19 pandemic is accelerating this transformation across the globe.

Businesses and industry leaders worldwide will gather in Beijing on Thursday to attend the 2021 China International Fair for Trade in Services (CIFTIS). Digital services, the main focus of the six-day fair this year, are set to expand their cooperation through the creation of abundant opportunities.

The leap-frogging digital growth in China in recent years has become a key driving force for high-quality development pursued by the country. China's endeavors to achieve better growth will, on a global scale, be a boost for the world's post-pandemic recovery that is seeing some positive signs.

With services trade being a pillar of China's vibrant economic activities, China's economic resilience will provide broad prospects for international cooperation amid the pandemic.

China has effectively controlled the virus with stringent and persistent measures, including combating a recent surge of Delta cases in some parts of the country. The launch of the 2021 services fair in Beijing during the pandemic is proof of its successful handling of the virus.

The arduous battle has enabled the country to maintain growth in the pandemic-hit 2020 while other major countries have failed to do so, and score a 12.7-percent growth year-on-year in the first half of 2021.

Trade in services has recorded a leap due to China's push for high-level opening-up and all-round innovations since 2021 -- the country's imports and exports of services totaled 2.37 trillion yuan (365.4 billion U.S. dollars) in the first half of the year, up 6.7 percent annually.

Digital services are experiencing a gradual shift from an alternative to a necessity, as traditional forms in the services sector, such as tourism and transport, have been dealt a hard blow by the raging pandemic.

In 2020, China's digitally deliverable trade in services rose by 8.4 percent year-on-year, and accounted for 44.5 percent of the total services trade, official data showed.

While livestreaming, e-commerce, unmanned logistics and other forms of digital services are booming, China has also been strengthening its regulation of the digital industry to provide fertile soil for high-quality growth.

The Chinese authorities have been making progress in breaking the monopoly of a few Internet giants to maintain fair and healthy market competition. Just in July, they launched a six-month campaign to target activities that disrupt market order, damage consumer rights, and threaten data security.

Meanwhile, China has been continuously pushing for a further opening-up of its market to facilitate the access of high-quality foreign enterprises in the services sector.

A slew of measures include the shortening of the negative list for foreign investment for four consecutive years, and the release of a negative list for cross-border trade in services at the Hainan free trade port, among others.

Foreign enterprises have shown robust confidence in the Chinese market due to its market size and resilience against economic headwinds. Data showed foreign direct investment in the Chinese mainland has maintained a sound momentum since the second half of 2020.

The world's second largest economy has also held yearly editions of several international trade fairs, including the CIFTIS in Beijing, the China International Import Expo in Shanghai, and the China Import and Export Fair, among others, to set up venues for stronger interconnectivity among markets worldwide.

China's endeavors to promote high-quality development reflect its commitment to the world's common prosperity. If the world's countries all join forces, the global community will emerge victorious from the pandemic and the economic downturn at an early date, and improve people's quality of life in the long run.