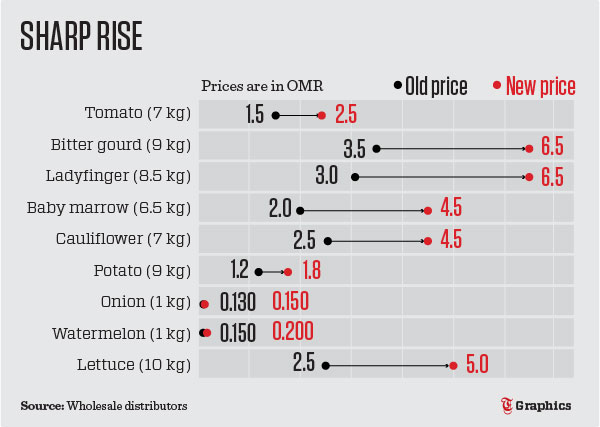 Muscat: Fruits and vegetables prices are sky high as wholesalers take advantage of the Ramadan rush, with the cost of some fruits rising 50 per cent in just two days.
As vegetables and fruits prices have gone up by half already, a senior consumer protection official said that a team of officials will be deployed, making round-the-clock visits to check prices during the holy month of Ramadan and take action against vendors who are overcharging customers.
**media[428346]**
While agreeing that there will be a price rise due to various reasons, an official from the consumer protection authority said that officials will work extra shifts to apprehend vendors who charge too much.
Mawaleh Central Market wholesale vendors and distributors revealed on Sunday that the price of vegetables and fruits have risen 50 per cent due to the end of the farming season in Oman, climate change, and also because goods from Syria and other countries are not available due to ongoing unrest in those countries.
“The price of one carton (seven kilogrammes) of Jordan tomato was OMR1.5 two days ago. Today it is OMR2.5. For one carton (nine kilogrammes) of bitter gourd it was OMR3.5, now it is OMR6.5. For one carton (8.5 kilogrammes) of ladyfinger it was OMR3, now it is OMR6.5. For one carton (6.5 kilogrammes) of baby marrow from Jordan it was OMR2, now it is OMR4.5,” Kabeer CV, a wholesale dealer, told Times of Oman.
Kabeer added that price of lettuce for one carton (10 kilogramme) was OMR2.5 and now it has become OMR5.
According to Kabeer, the demand has pushed up the price, and even if wholesale orders are placed early in the morning, it is quite difficult to ensure purchases since stocks are sold very quickly.
W M Hashim, a wholesale dealer of watermelon in Muscat, said that price is already 150 baisas per kilogramme and it may go up to 200 baisas.
“Currently, watermelon is purchased mainly from Iran. They used to come three days per week. Now, as the demand is going up, they will arrive daily. According to Iranians, the price in Iran is going up and so they are compelled to increase their price,” Hashim said. He noted that he sells four tonnes of watermelon daily.
A Public Authority for Consumer Protection (PACP) official said their employees have begun working evening shifts to monitor a wide variety of goods in the market during the holy month of Ramadan.
“The PACP will be ready to receive complaints and reports from the public and sort them immediately. We will ensure the availability of all necessary commodities at normal prices during Ramadan, in coordination with different departments and shopping malls,” said Omar Al Jahdhami, vice-chairman of PACP for consumer services and monitoring markets.
Omar Al Jahdhami added that the PACP teams would ensure that supermarkets and hypermarkets abide by the rules.
“The PACP teams will undertake round-the-clock field visits in the markets during Ramadan. This is being done to ensure, in coordination with importers, distributors, hypermarkets and supermarkets, that there is no shortage of goods,” he added.
Al Jahdhami also called on the public to not hesitate to contact the PACP to report violations.
Meanwhile, a senior official at a hypermarket said store officials work to cushion price increases.
“Due to summer and the increased demand for vegetables as Ramadan is approaching, prices are going up as usual. However, we try our best to offer the best price for our customers. We try to purchase directly from global markets and also offer different varieties at affordable prices,” said Ananth A V, director, Lulu Hypermarkets - Oman and India.
According to Muscat Municipality, the Central Vegetable Market in Mawaleh has received over 28,000 tonnes of fruits and vegetables to meet the needs of domestic consumers during Ramadan and avoid any possibility of increases in prices.