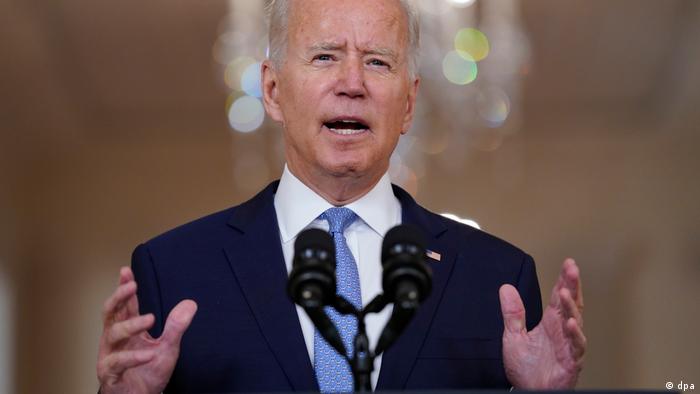 New York: US President Joe Biden said he would "go after terror wherever it is" on Tuesday evening, following the messy withdrawal of troops from Afghanistan and the US exit from a failed 20-year war.

The country's swift fall into the hands of the Taliban took onlookers and Afghans by surprise and sent thousands fleeing. Following US withdrawal, the Taliban seized control of the Hamid Karzai International Airport in Kabul, completing the takeover of much of the country.

What did Biden say on the war?

Joe Biden said that "the war in Afghanistan is now over" after making a commitment with the American people to end it.

He said $300 million (€254 million) was spent every day in Afghanistan and it was time to leave.

"I refused to open another decade of war in Afghanistan," he said, before adding that 800,000 Americans had served in the country and 2,461 had died, including 13 "heroes" last week.

Biden said the US had "succeeded in what we set out to do in Afghanistan over a decade ago. Then we stayed for another decade.

"It was time to end this war," he reiterated.

What did he say on the evacuation?


The US president spoke glowingly about the evacuation, saying it was "one of the biggest airlifts in history. No nation has ever done anything like it."

He added that "the assumption that more than 300,000 Afghan national security forces we had trained over the past two decades ... would be able to hold a period of time ... turned out not to be accurate."

But Biden said he had "instructed our national security team to prepare for any eventuality, even that one."

In the end he said 90% of Americans who wanted to leave were airlifted, along with thousands of Afghan diplomats and support staff. More would be brought out as soon as the airport was opened once again by the Taliban.

He said that "with more than 120,000 people evacuated to safety, that number is more than double what most experts saw as possible."

Biden answered critics who said that the evacuation could have been carried out earlier in a more orderly manner.

"Imagine if we've begun evacuations in June or July, bringing thousands of American troops and evacuating more than 120,000 people in the middle of a civil war," he said. "There would have been a rush to the airport, a breakdown and confidence in control of the government and it still would have been a very difficult and dangerous mission."

What lessons were learnt?


The US President hinted at a new direction in US foreign policy, indicating the country had learnt important lessons in Afghanistan.

"First, we must set missions with clear achievable goals, not ones will never reach," he said. "And second, stay clearly focused on the fundamental national security interest of the United States of America.

"It's about ending an era of major military operations to remake, other countries," Biden added.

He said this meant "moving on from that mindset in those kinds of large scale troop deployments," although he said "human rights would be at the center of our foreign policy."

Looking to the future, Biden explained that "the terror threat has metastasized across the world well beyond Afghanistan."

"The world is changing," he continued. "There's nothing Chinaor Russia would want more in this competition than the United States to be bogged down for another decade in Afghanistan."

NATO Secretary-General Jens Stoltenberg earlier said that Afghans who were not able to get out of Kabul on evacuation flights would not be forgotten. He added that it was "essential" to keep the airport open, both enable humanitarian aid and allow for officials to "continue to get people out."