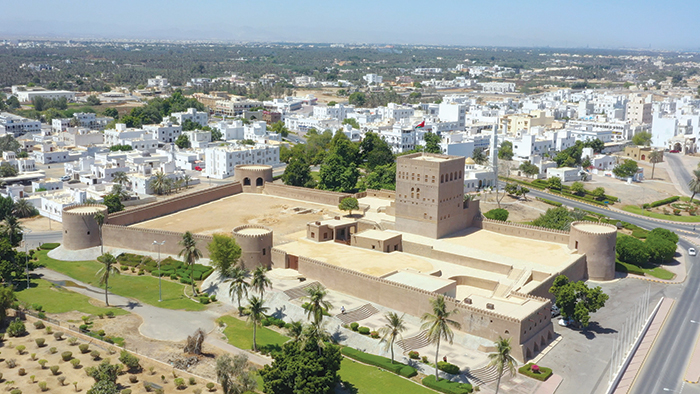 Sohar Fort is considered one of the most important castles and forts in the North Batinah Governorate due to its outstanding location and the significant role it played over past centuries. This fort dates back to the end of the thirteenth century and beginning of the fourteenth . Archaeological excavations carried out at the fort confirmed that it was completed in the fourteenth century.

Unlike many of the other forts in the region, which are traditionally the colour of the mud bricks that they are made from, a colour that is similar to that of the desert sands, the walls and crenellations of Sohar Fort are completely white.

Built during the 13th century, Sohar Fort now houses a small museum in its largest tower but an original 10 km long tunnel that served as an escape route in the event of a siege is still intact.
The Sohar Fort Museum was opened on November 17, 1993 on the occasion of the 23rd anniversary of the country's National Day to highlight the history of the city of Sohar and historical landmarks.

The museum showcases Sohar’s role in the cultural world and in trade as well as Islamic history and the contribution made by Omanis in the field of navigation. Their role in spreading  Islam in many parts of the world is also highlighted in the museum.

The museum also deals with the major role played by the city in ancient times in copper trade and its relationship with the city of Canton in China, in addition to a lot of artefacts found during archaeological excavations in the fort.
Sohar Fort Museum is full of artefacts giving information about the glorious past of the country which are of great historical value. It is one of the most important tourist destinations for visitors to the city and for students who want to discover history of Sohar and the depth of the Sultanate’s trade links with neighbouring civilisations.