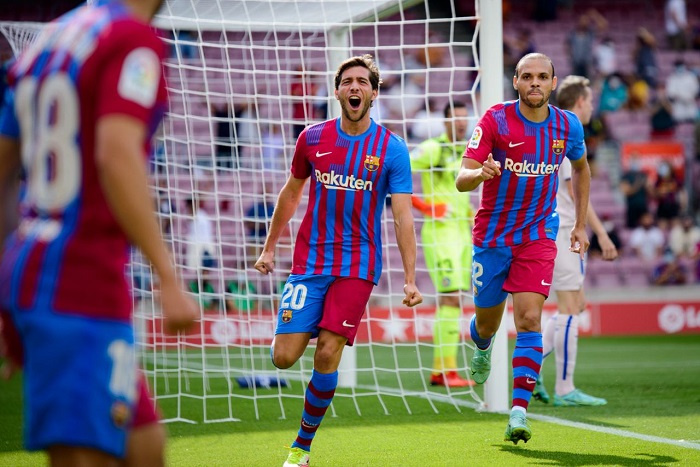 Things looked to be going to plan for Barca in the second minute when Sergi Roberto opened the scoring from close range from Jordi Alba's pass.

Barca's joy didn't last for long before former Barca player Sandro Ramirez leveled with a low shot from outside of the penalty area.

Memphis scored what turned out to be the winning goal in the 31st minute with an impressive individual goal, working space with a stepover before firing home.

Koeman's side held on for the win but failed to impress against a rival that has lost the first three games this season.

Rayo Vallecano celebrated the return of top-flight football to their Vallecas Stadium with a 4-0 thrashing of Granada.

Alvaro Garcia opened the scoring in the second minute and Oscar Trejo's penalty doubled the lead 20 minutes later before Randy Nteka assured the points before the break and Santi Comesana added a fourth in the 57th minute.

Osasuna rallied to beat Cadiz 3-2 with two injury-time goals in a game of three penalties - all for handball.

Alex Fernandez put Cadiz in front before Kike Garcia leveled for Osasuna from the spot, only for Alex to re-establish Cadiz's lead after another handball with 25 minutes remaining.

The third penalty came at the start of injury time and this time Roberto Torres netted from the spot before David Garcia's far post finish in the 94th minute gave Osasuna a win that had looked unlikely moments earlier.

On Saturday Dani Carvajal's goal saw Real Madrid win 1-0 away to Betis, while Sevilla drew 1-1 away to Elche with the goals scored by Enzo Roco for the home side and Youssef En-Neysri for the visitors.

On Friday, Mallorca won 1-0 at home to Espanyol, while Valencia enjoyed a comfortable 3-0 victory at home to Alaves, who have kicked off the new season with three defeats.