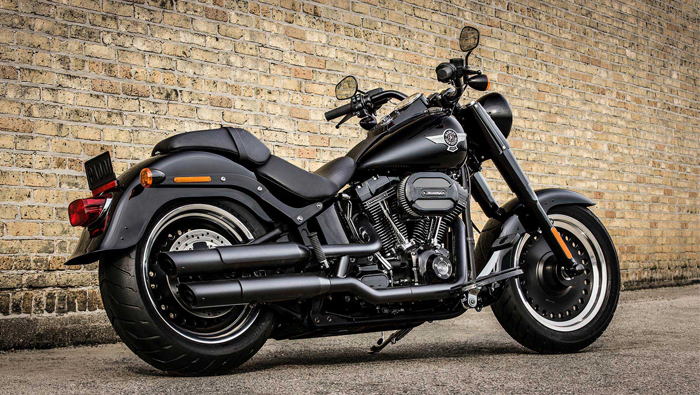 A mere glance on this mean machine could set your heart pulsating. It’s bold, it’s dark, and it’s raw with custom attitude wearing the meanest looks, and bellying the most powerful Harley engine. The demons in you begin to Futterwacken as you’re consumed by darkness of the total blacked-out theme.
For the first time Harley-Davidson has stuffed 110-cu.in Twin Cam Screamin’ Eagle engine into the Fat Boy Lo frame and the beauty packs enough brawn now, christened as the Fat Boy S. A midnight ride through the finally-not-so-clogged Dubai boulevards and I was left simpering in amazement: It’s no tractor motor.
I had always been an HD fan, but more so for their fit and finish. Their engines – V-Rod series apart; always felt somewhat lacking to me, myself being more of a power buff. But this beauty shattered all the presumptions; it’s fast and it’s eager.
You sit so low (26.3 inch seat height), you feel like you are in the bike, and not on it. The effect of being pulled along by the pumped up motor is total ecstasy – like having your backside dragged along the ground by a dragster. The powerful engine pulls willingly from under 2000 revs, and you don’t have to tap-dance on the gears to make swift progress.
The Fat Boy S takes a bit of effort turning with that meaty 140mm front tyre, but the wide bars reduce it pretty much and keep it ultra-stable. Change your line mid-corner is also piece of cake, without feeling like having unsettled the whole ship. The sounds of scraping floorboards on every turn through the series of roundabouts near the Marina area was total fun (thanks to the low clearance).
Atypical of the big Harley twins, the bike has a heady top end and responds nicely to stacks of revs. I even tried signal to signal racing. Pulling off a traffic signal real fast, the pointer touched 140 (kph), before I begun slowing down for the next one up. Yes, it is actually that fast. Once onto the winding roads, the S is a fun bike to punt along. The hydraulic clutch feels light with good engagement, helping in quicker and much smoother shifts.
Adding to the euphoria, the wider breathing Screamin’ Eagle air filter and the slash cut mufflers pipes create a deep bassy caterwaul at high revs. There’s absolutely no mechanical noise to the ultra-smooth engine; just the wheezy breathing in and out.
The S seems more rigid and firmer than before, even though there are no tweaks to the suspension. Maybe the added 4kg weight has got to do something with the change in feel. Braking is also very effective, pulling up the beast instantly, even though there is only a single disc up front.
The cruise control conveniently located on the left switch block, works perfect with no lag and a very positive feel when you increase or decrease the speed settings. The fly-by-wire throttle lends plenty of feel and smoothness off idle making the tight turns and bends very manageable.
Another cool feature on the bike, borrowed from the touring models, is the ‘Electronic Engine Idle Temperature Management System’ (EITMS) which turns off the rear cylinder when the bike is stopped, which helps in keeping the engine cooler. The function can be enabled or disabled using the throttle grip. Pushing the throttle forward or three seconds, with the ignition on, will change the status. Green flash on the cruise control lamp signals activated mode, while red denotes the opposite.
However, as with most cruisers, heat is still a problem with the S too. After an hour or so of riding, my right inner thigh began receiving heat therapy; the engine placed so close — rear cylinder almost touching the thigh.
As for the styling, the aesthetics remain virtually unchanged with the fat handlebars, fat wheels and fat fenders. The iconic solid, bullet-hole disc wheels are still instant fancy grabbers.
It is the paint scheme that has gone from dark to darker, with a blacked-out engine and gloss black lower forks, handlebar and riser; even the brake and the shotgun exhaust. The only hints of chrome left are on the expansion chamber fins, rim linings, and the rear brake and shift shafts.
Dark, mean, and all the more muscular, the Fat Boy S is built to impress. Ride one and you’ll understand.