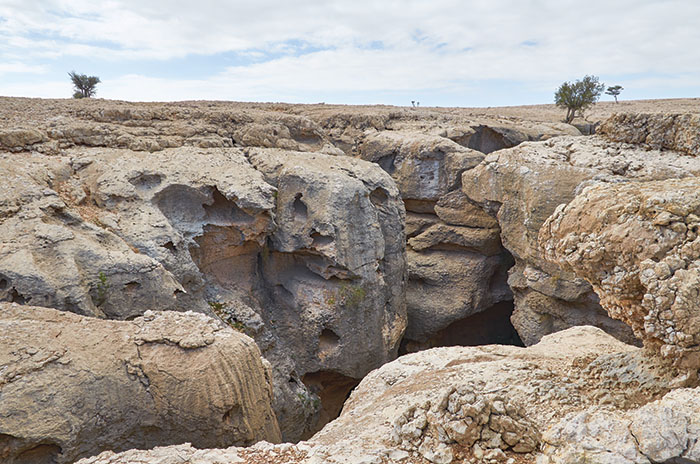 Majlis Al Jinn Cave, or Salma Plateau as it is commonly known, is considered one of the largest underground caves in the world. Located at the foothills of the eastern Al Hajar Mountains lies Majlis Al Jinn Cave, one of the greatest and most beautiful natural wonders. It is situated along the road linking Fins with Tiwi Village of Wilayat Sur in the A'Sharqiyah South Governorate.

According to Oman's Ministry of Tourism, "The area of this enormous cave is 58 thousand square metres and its capacity is 4 million cubic metres. The length of Majlis Al Jinn Cave is 310 metres and its width is 225 metres. A dome-shaped ceiling tops the cave at a height of 120 metres. Despite the enormity of this cave, it is difficult to detect it from the outside in this vast area, as the only evidence of its existence is a scant three openings that seem of no importance to the viewer."

This cave was accidently discovered  while searching for carbonate rocks in a quest to discover deep underground water reserves. "The first man to descend inside the cave was Don Davidson in 1983, through an opening extending to a depth of 120 metres, considered to be the shallowest of the three openings. In 1984, he was followed by his wife, Cheryl Jones, who descended into the Cave through its deepest opening, which goes down 158 metres.  Don Davidson once again descended through the third opening in 1985," according to Oman's Ministry of Tourism.

To reach the cave opening requires a lot of physical effort through rugged mountain terrain and it takes about five hours.