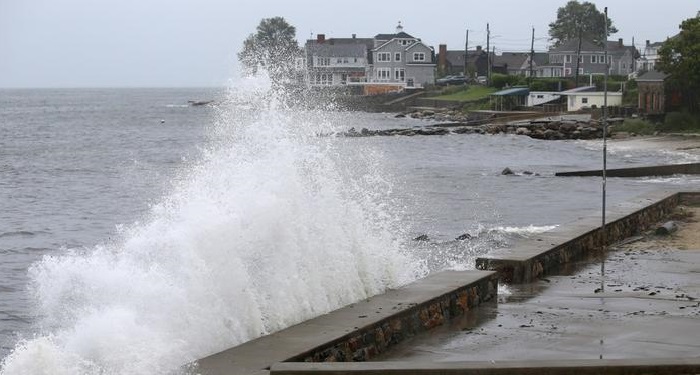 Tropical storm Henri made landfall in the small northeastern US state of Rhode Island on Sunday.

Henri was downgraded to a tropical storm from a hurricane earlier in the day, as it rapidly approached New York's Long Island and New England.

What do we know about the storm?


The storm has a maximum wind speed of 110 kilometers per hour (68 mph) and is expected to bring heavy winds, flooding and power outages to the East Coast.

"Dangerous storm surge inundation is expected to continue today in portions of Long Island, Connecticut, Rhode Island, and southeastern Massachusetts, where a Storm Surge Warning has been issued," the Miami-based National Hurricane Center said in a tweet. "Residents in these areas should follow any advice given by local officials."

New York residents braced themselves for the impact of the storm, with New York Governor Andrew Cuomo declaring a state of emergency on Saturday. Cuomo deployed 500 national guard soldiers to respond to the extreme weather event.

The storm's impact reached eastern Long Island on Sunday and the village of Montauk. New York City is expected to be spared from the eye of the storm, but the greater area could still be hit with heavy rains and flooding.

Connecticut Governor Ned Lamont also declared a state of emergency in advance of Henri, with the Red Cross opening shelters for those impacted.

President Joe Biden has greenlit federal emergency aid for much of the Northeast, with millions of residents expected to be affected by the storm.


Henri forced a major concert in New York City on Saturday to be cut short because of lightning. The concert featured stars such as Bruce Springsteen, Paul Simon and Carlos Santana.

Concertgoers were doused with rain. The event was celebrating New York's recovery from the coronavirus pandemic, despite the surge of the more contagious delta variant.

In Massachusetts, ferries to the popular island destinations of Martha's Vineyard and Nantucket were canceled on Sunday in anticipation of the storm. A baseball game at Boston's Fenway Park was also postponed.

Henri is the latest major tropical storm to hit the US this week, after Fred made landfall in Florida on August 16. Fred killed at least two people in North Carolina and left several others missing.

Tropical storm Grace also made landfall in Mexico this week, first on the southeastern Yucatan Peninsula and then on the mainland. The storm has killed at least eight people in Mexico, after bringing heavy rains to Haiti and Jamaica.


Meanwhile, at least 21 people have died and 50 others are reported missing after heavy flooding hit parts of Tennessee over the weekend.

A dispatcher at the Humphreys County Sheriff's Office confirmed the number of those killed and missing on Sunday.

Record rainfall of up to 17 inches (43 centimeters) in some areas sparked the massive deluge on Saturday afternoon and evening.

Especially hard hit was the town of Waverly, some 55 miles (88 kilometers) west of Nashville. Hundreds of homes were destroyed there.

Saturday's flooding in rural areas took out roads, cellphone towers and telephone lines, leaving families uncertain about whether their loved ones survived the unprecedented levels of flooding.