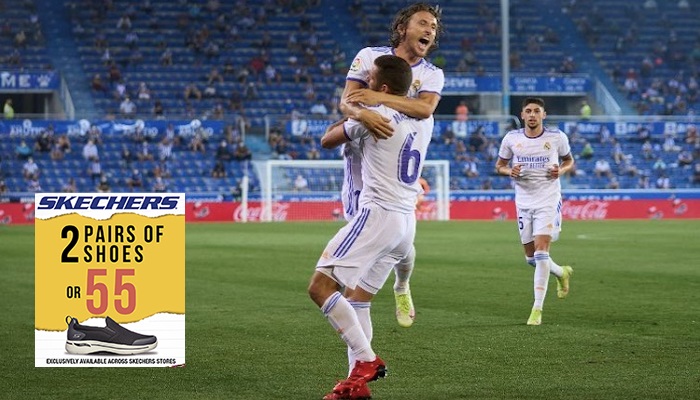 Madrid: Real Madrid will be without central midfielder Luka Modric for their visit to play Levante on Sunday after the Croatian suffered a groin injury in training.

Although it's not yet certain how long Modric will be out for, he will certainly miss out on and has to be considered a doubt for next weekend's game away to Betis.

The injury comes with Toni Kroos also sidelined with a pelvic injury, while Dani Ceballos is a long-term absentee after picking up an ankle ligament injury in the Olympic Games.

Modric's injury could have given a chance for Martin Odegaard to show what he can do, but the Norwegian ended his seven-year relationship with the club on Friday with the confirmation of his transfer to Arsenal, so Isco will probably partner Casemiro and Fede Valverde in the Real Madrid midfield.

Eden Hazard and Gareth Bale are expected to continue in attack where Carlo Ancelotti will continue to favor experience over the young Brazilians Vinicius Jr and Rodrygo, both of whom will have to wait their turn on the bench.

Meanwhile Karim Benzema will lead the attack two days after signing a contract extension that will keep him at the club until the end of June 2023, when he will be 35 years old. The years don't appear to be catching up with the Frenchman, who scored twice in Real Madrid's opening day 4-1 win away to Alaves last weekend.

David Alaba will continue at left back with Marcelo and Ferland Mendy both sidelined with Eder Militao and Nacho Fernandez in central defense and Lucas Vazquez on the right.

Levante were unlucky not to win in Cadiz in their opening game, with only a 96th minute equalizer denying them all three points, but coach Paco Lopez has a well-balanced team, strengthen by the return of Jose Campana from injury and with Jose Luis Morales and Jorge Frutos (a former Madrid youngster) a threat on the wings and be tougher rivals than Alaves were last weekend.