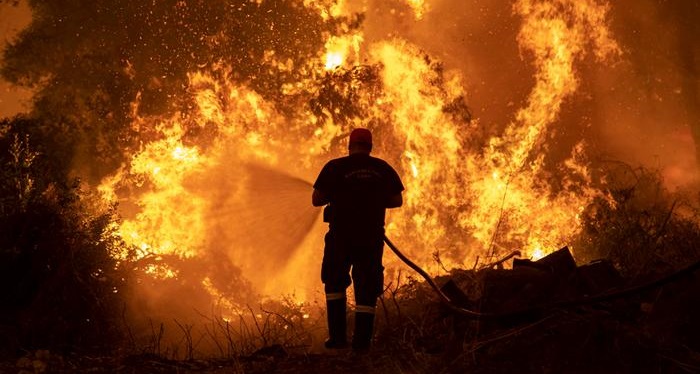 Greek Prime Minister Kyriakos Mitsotakis apologized on Monday amid a backlash against his government's response to the country's devastating wildfires.

Hit by its worst heatwave in decades, Greece has struggled to contain the hundreds of wildfires that have burnt to a cinder pristine pine forests, forcing thousands to flee.

Firefighters were still battling into the night on Monday a massive blaze on Greece's second-largest island, Evia, for the seventh consecutive day.

What did Mitsotakis say?


In a televised address, the prime minister said the destruction in Evia and elsewhere "blackens everyone's hearts" and pledged compensation for those affected.

He announced a supplemental budget of €500 million ($587 million) to fund rebuilding, reforesting and compensation.

Mitsotakis also apologized for "any shortcomings" in the state response, vowing to hold those responsible to account.

"I fully understand the pain of our fellow citizens who saw their homes or property burned," Mitsotakis said. "Any failures will be identified. And responsibility will be assigned wherever necessary."

Several mayors had criticized a lack of aerial support in fighting the fires, despite the government's assurances of having set aside ample resources earlier this year.

"We may have done what was humanly possible, but in many cases it was not enough," Mitsotakis said in response. "We are dealing with a natural disaster of unprecedented dimensions."

What is happening in Evia?


The fire raging in Evia since August 3 has been the most severe of the hundreds witnessed across Greece this month.

Residents of the island's northern village of Kamatriades joined emergency crews on Monday to form a human chain as a wall of flames approached their homes.

"Villages are evacuated, but those who can help stay behind," central Greece governor, Fanis Spanos, told state news agency ANA. "Without them, many villages would have burned," Spanos said.

Their work on the ground is necessary at night as firefighting aircraft cannot fly in the dark.

Authorities had earlier ordered the evacuation of the nearby village of Avgaria. However, many residents remained determined to stay and defend their homes.

Hundreds of people lost their homes in Evia, greater Athens and other parts of Greece due to the wildfires.

Many of the fires across Greece have stabilized or receded by Monday, but Evia's rugged, forested landscape and wind have helped the blazes rage on the island.

What help is Greece receiving?


Greek authorities said EU member states and other countries have so far sent 21 aircraft, 250 vehicles and over 1,200 firefighters. The aid is set to arrive in the coming days.

PM Mitsotakis said he discussed the delivery of an additional giant BE-200 water bomber with his Russian counterpart Mikhail Mishustin.

At least 56,655 hectares (140,000 acres) were burnt in Greece from July 29 to August 7, according to the European Forest Fire Information System.