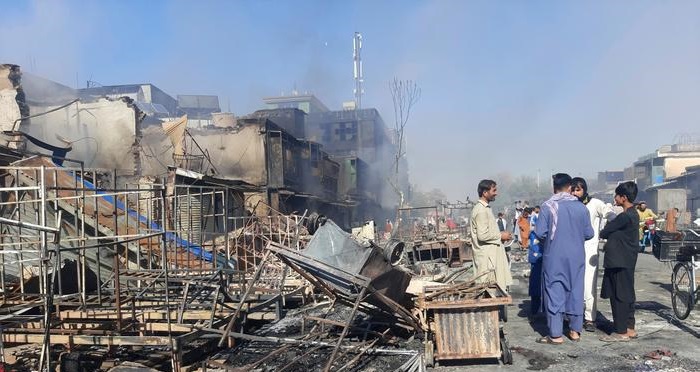 On Monday, the militant Taliban announced they had captured Aybak, the capital of the northern Afghan province of Samangan — the sixth provincial capital to fall to the group in four days.

Reports from the city say pro-government forces fled Aybak after the government in Kabul failed to send reinforcements and air support.

Monday's news followed that of similar military victories over the weekend in which the radical group captured capitals across the country in quick succession, including Kunduz — a strategic crossroads with good access to much of northern Afghanistan, as well as the capital, Kabul, about 335 kilometers (200 miles) away.

One of Afghanistan's larger cities, Kunduz served as home to the German army, or Bundeswehr, for the last 10 years of its 20-year deployment. It remained so until the last German soldiers were brought home this June.

How is Germany reacting to news of Taliban advances?


German Defense Minister Annegret Kramp-Karrenbauer reacted to Monday's news with a string of tweets that began: "The reports from Kunduz and all across Afghanistan are bitter and deeply painful. We fought there with our allies. Bundeswehr soldiers died in Afghanistan."

After listing several positive aspects of Germany's mission in the long thread, Kramp-Karrenbauer made a point of noting: "What we apparently failed to do was effect long-term positive change in Afghanistan. We should learn from that when defining the aims of future foreign deployments."

She also responded to calls by some to redeploy German soldiers to Afghanistan as the Taliban swiftly erase gains made over the past two decades.

"Are society and parliament prepared to send the Bundeswehr into a war and keep large numbers of troops there for at least a generation? If we are not, then the joint withdrawal with our partners remains the right decision," the defense minister wrote.

Her tweet seemed to offer a direct rebuttal to views expressed by Parliamentary Foreign Affairs Committee Chairman Norbert Röttgen this weekend in an interview with Germany's Frankfurt Allgemeine Zeitung newspaper.

Röttgen, a fellow center-right Christian Democrat, suggested that the international community must stop the Taliban, saying: "If that means having to use the military capabilities of the Europeans, of the Germans, then we should make them available."

Kramp-Karrenbauer also brushed off critics who say the Taliban would not have gone on the offensive had German troops still been in the country, warning: "Anyone who seeks the long-term defeat of the Taliban must lead a long, tough combat mission."

Lastly, the defense minister took aim at former US President Donald Trump for contributing the current quagmire: "Trump's unfortunate deal with the Taliban was the beginning of the end," she said of the former leader's announcement that he would withdraw US troops from the country — essentially forcing allies who came to assist the US to exit, too.

How did we get here?


The October 2001 invasion of Afghanistan was undertaken by then-US President George W. Bush in an attempt to uproot al-Qaida terrorists given safe haven in Afghanistan before and after the September 11 attacks on the World Trade Center in New York and the Pentagon in Washington DC.

That invasion was the beginning of what would become the longest war in US history.

US President Joe Biden has promised to have all troops out of Afghanistan by September 11, 2021, while other NATO troops are expected to be fully out by the end of summer.

Violence has escalated since Trump announced the withdrawal of US troops from Afghanistan, with the Taliban seizing territory across the country, with the Afghan army struggling to push back the offensive.

The Pentagon admitted on Monday that the security situation in Afghanistan was "not going in the right direction" but that Afghan forces were capable of holding their own, Reuters reported.

"These are their military forces, these are their provincial capitals, their people to defend and it's really going to come down to the leadership that they're willing to exude here at this particular moment," spokesperson John Kirby said.

Slow moving peace talks that began in Qatar last year have now stalled completely as both sides speak of war.

United Nations observers say more than 1,000 people have been killed or injured in Afghanistan over the past month. A massive rise in the number of displaced persons has also been registered, with thousands of Afghans fleeing as the Taliban advances.

During its 20-year mission, Germany provided the second-largest military contingent in Afghanistan (after the United States), losing more troops in combat in Kunduz than anywhere since World War II.