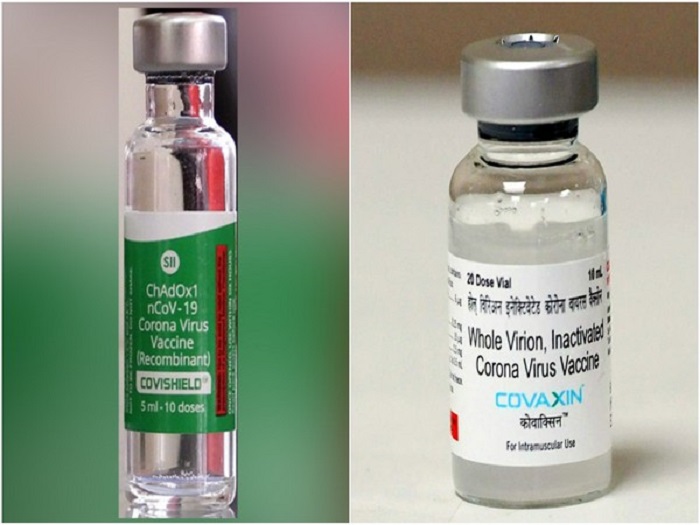 New Delhi: The Indian Council of Medical Research (ICMR) has revealed in its study that the combination of Covaxin and Covishield vaccines, the two main vaccines of the COVID-19 vaccination programme, conducted on 18 people, has elicited better safety and immunogenicity results.

The nationwide vaccination program had entered into 4th month when the event of mixed dosing raised considerable anxiety in the public domain with the potential to contributing to vaccine hesitancy. ICMR conducted the current investigation against that backdrop.

In the study, ICMR compared the safety and immunogenicity profile with those individuals who received either Covaxin or Covishield and it showed better results.

The study conducted on individuals in the northern state of Uttar Pradesh in India received Covishield as the first dose followed by inadvertent administration of Covaxin as the second dose at an interval of six weeks.

As per Dr Samiran Panda, Head of Epidemiology and Communicable Diseases, ICMR, "it was like a natural experiment when second time these individuals inoculated with different doses inadvertently."

He informed that ICMR decided to conduct the study so that people would not get anxiety or vaccine hesitancy. "We went to the place and collected samples of individuals," said Dr Panda.

"A comorbid condition (hypertension) was reported in one (5.5 per cent) individual. In both the homologous groups, 40 individuals were included," the study said.

"We compared the safety and immunogenicity profile of them against that of individuals receiving either Covishield or Covaxin (n=40 in each group). Lower and similar adverse events following immunization in all three groups underlined the safety of the combination vaccine regime. The immunogenicity profile against Alpha, Beta, and Delta variants in the heterologous group was superior; IgG antibody and neutralising antibody response of the participants was also significantly higher compared to that in the homologous groups," the study said.

The findings of the study suggest that immunization with a combination of an adenovirus vector platform-based vaccine followed by an inactivated whole virus vaccine was not only safe but also elicited better immunogenicity.

"We did a comparison with heterogeneous group and homologous group, we found better immune response, if somebody gets Covishield first and Covaxin second that it gives better immunity. This is the first study on a combination of Adenovector and whole variant vaccines," said Dr Panda.

Explaining how the combination of two vaccines work, Dr Sameer Bhati, Public Health Expert, stated that both Covaxin and Covishield are based on two different formulas, where Covaxin contains dead virus of Covid and instructs the immune system to develop a defense against the virus while the Covishield is based on the virus vector formula where a weak virus of the common cold is used to develop immunity against Covid virus.

"Although both vaccines tend to develop the immunity against the same virus. The mixing of two vaccines may be beneficial for the public and may surely result in removing vaccine hesitancy and speed up the vaccination," he said.

However, Dr Bhati added that more detailed and in-depth research must be done on the limitations, as the study is done merely on 18 participants. "For implementation of the same at the national level, it must be analysed more and in detail keeping in mind the variety of population. Also, a detailed study on follow-up period of 60 to 70 days is also required," he further said.