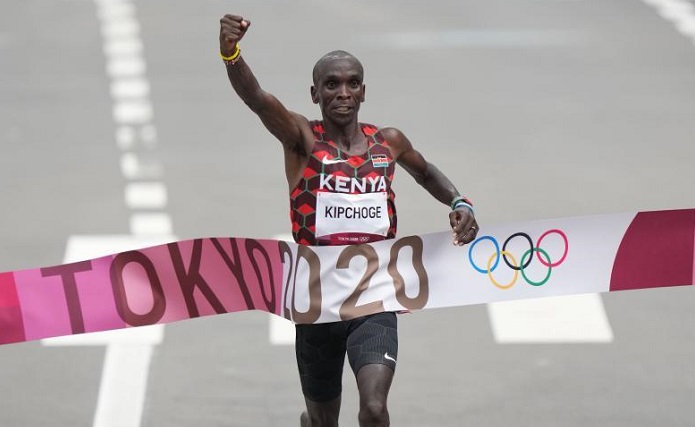 Eliud Kipchoge of Kenya celebrates after the men's marathon final at the Tokyo 2020 Olympic Games in Sapporo.

Tokyo: Eliud Kipchoge of Kenya won the men's marathon gold medal in a time of 2:08:38 at the Tokyo Olympic Games on Sunday.

Abdi Nageeye of the Netherlands took the silver medal while Abdi Bashir from Belgium completed the podium.

Brazil retained its Olympic men's football gold medal with a goal in extra time to beat Spain 2-1 on Saturday.

After its first Olympic gold at Rio 2016, the samba legion repeated its glory at the International Stadium Yokohama, where its national team won the 2002 World Cup.

Brazil missed the chance in the first half to take a lead. Spain's goalkeeper Unai Simon took out Matheus Cunha in the box when trying to clear an incoming pass, and the referee awarded Brazil a penalty.

Everton forward Richarlison, who came to the final as the tournament's best scorer with five goals, took to the spot but blazed the ball over the bar.

Brazil found their goal in the additional time of the first half when a floated ball drop into the box and Cunha took control of it ahead of Spanish defenders to put it into the net.

Bryan Gil almost delivers the winning goal in the 88th minute for Spain but his powerful strike from outside the box hit the crossbar.

As the match went into extra time, it was brazil who found the winning goal. Malcom, who came out from substitution, powered over Spanish defender in catching an overhead pass and shoot the ball past the Spanish goal keeper in the 108th minute.

Brazil maintained the score until the final whistle and won the match 2-1.

In the Bronze medal match on Friday, Mexico defeated hosts Japan 3-1 in a commanding victory. Sebastian Cordova first scored a penalty for Mexico before assisting two further goals for his teammates. Japan only got one back in the 78th minute.