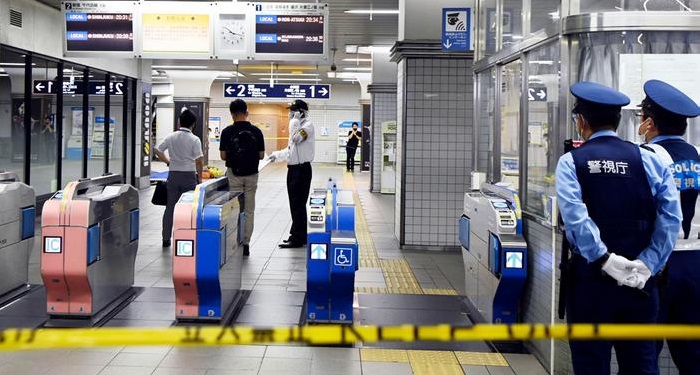 A man with a knife attacked at least 10 people on a commuter train in Tokyo's Setagaya ward, in the west of the city, on Friday evening.

Nine of the victims were taken to nearby hospitals, Tokyo fire department officials said. A man in his 30s has been reportedly arrested.

The site of the attack is a few kilometers from the venue of the Olympic equestrian events. The Toyko Summer Games end Sunday.

How did it happen?


A man in his 30s brandished a knife on the Odakyu Odawara Line in the west of the city. He reportedly developed the intent to kill after seeing women who looked happy and chose his targets at random, according to the NHK public broadcaster.

He left the knife behind as he fled the scene of the attack. Ultimately, he walked into a convenience store and identified himself as the man who stabbed people on the train, according to the public television.

The store manager called the police after seeing bloodstains on his shirt.

Some train services were suspended following "an assault in a carriage," railway operator Odakyu Electric Railway Co. posted on its website.

All those who were taken to hospitals were conscious, fire department officials said. A woman in her 20s was seriously injured, according to NHK media.

What happened at the station?


Witnesses told NHK media that they saw passengers smeared in blood walk out of the train. One person was asking for immediate help, announcing there had been a stabbing on the train.

Dozens of paramedics and police had arrived at the station immediately after. The attack reportedly took place around 8:30 p.m. local time.

Japan has strict gun laws but there are occasional violent crimes involving knives.

In 2019, a man carrying two knives attacked a group of schoolgirls waiting at a bus stop just outside Tokyo, killing two people and injuring 17 before killing himself.

In 2018, a man killed a passenger and injured two others in a knife attack on a bullet train.