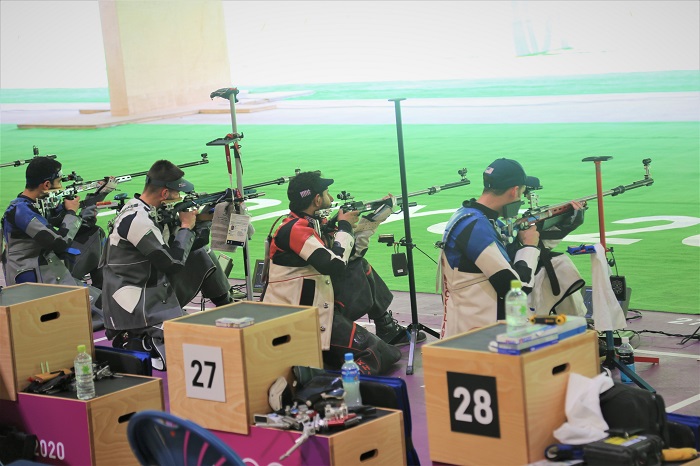 The top eight shooters got the highest score in the qualification round and advanced to the final on Monday.

Sebic Milenko (SRB) came fourth with 1,180 points. Miran Marcic (CRO) earned a direct ticket to finals as he came fifth with 1,178 points while Serjiy Kulish (UKR) finished sixth with 1,178 points. The seventh qualifier was Petar Gorsa (CRO) with 1,176 points while Yury (BLR) took the last ticket with 1,176 points as well. In his previous participation at the Rio 2016 Olympics, Khatri had recorded 1,138 points and finished at 43rd place. Confidence

After the event, shooter Hamed Al Khatri said that it was a cumulative experience for him to attend the Olympic Games. “The lesson I learned is confidence and having the ability to do best in the forthcoming events. Striving for the top positions is the target and I will continue my training to reach the top,” he added.

“I aimed to qualify for the finals but it was pretty difficult as many of the world ranking shooters took part and registered highest scores. Also, it was too windy. I will work to enhance and plug my weakness and focus on having quality shots with highest scores,” he said.


With completion of Khatri’s participation, the Sultanate’s ended their campaign at the Tokyo 2020 Olympics. Five athletes represented the Sultanate and competed in four different disciplines. Swimmer Issa Al Adawi began the campaign as he was placed in sixth place with a timing of 51:81s in the 100 metres freestyle.

Sprinter Mazoon Al Alawi finished sixth in the 100m race event with a timing of 12:35seconds. Oman’s top sprinter Barakat Al Harthy advanced to Round one of the Men’s 100m race event in Tokyo 2020 Olympic Games. He topped preliminary heat in two groups and clocked 10:27 seconds as his season’s best record. In round One of qualification heat five of Men’s 100 m race event, Barkat clocked 10:31 seconds and came seventh.


Kazem Al Balushi, Oman’s Chef de Mission, appreciated the cooperation of all the representatives of the national teams which took part in the 32nd Summer Olympic Games Tokyo 2020 for their commitment and adherence to all precautionary measures and preventive instructions issued by the organizing committee to have a safe Olympic Games.

“A special thanks to all the players, coaches and administrators who followed all the rules and regulations to ensure their safety and the safety of all Olympic participants,” he added. Kazem pointed out that everyone was looking for good results from our athletes.

“I believe all the sporting associations and committees have to learn from the mistakes and weakness of this participation. Also, they have to set long term plans and proper strategies to ensure registering top results in the forthcoming international events,” he ended.