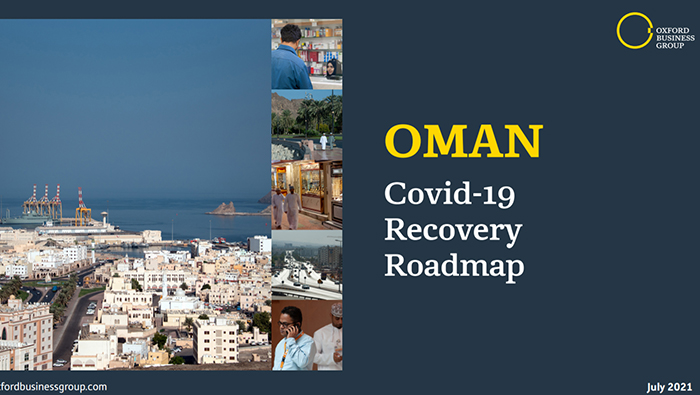 The report provides in-depth analysis of Oman’s response to the pandemic and plans to generate new revenue streams in an easy-to-navigate and accessible format, focusing on key data and infographics relating to the country’s socio-economic landscape.

OBG tracks the steps taken by businesses to up the tempo of their digital transformation strategies during the pandemic, noting that many of the initiatives introduced dovetailwithe.Oman 2030, the national digital roadmap, which aims to upgrade national technical capabilities, expand vital ICT infrastructure and launch e-government services.

Subscribers will also find coverage of the wide-ranging investment reforms and other supplementary measures implemented to support Oman’s plans for boosting foreign capital inflows and increase the contribution made by the private sector to the economy.
In addition, OBG notes the part that the Sultanate’s banks played in ensuring stability was maintained throughout the pandemic, in spite of the decline in oil prices and challenging operating environment.

The report shines a spotlight on Oman’s tourism sector, which has been primed for growth and job creation, following major improvements to the sultanate’s infrastructure and ongoing plans to develop hotels, vacation homes and integrated tourism complexes.

With Oman’s economy affected by the decline in the price of oil in 2020, OBG also analyses the key role earmarked for the government-owned entity Energy Development Oman (EDO), which was set up in December 2020 to improve revenue management and maximise returns on the country’s hydrocarbons wealth.

In addition, the roadmap looks at how industry players across the economy maintained business continuity during the pandemic and explores their plans for development against a backdrop of economic recovery in a series of case studies.

Jana Treeck, OBG’s Managing Director for the Gulf, said while the disruption to country’s hydrocarbons sector had taken its toll on Oman’s economy during the pandemic, an uptick in oil prices and the easing of restrictions on travel and business operations should help it to stabilise, with the IMF forecasting growth of 1.8 per cent in 2021, rising to 7.4 per cent next year.

“Oman had already begun diversifying its economy before the pandemic took hold and is now stepping up the pace of its efforts,” Treeck said. “While longstanding fiscal challenges remain, we expect further reforms to help boost inflows into targeted sectors of the economy and nurture new growth engines, paving the way for a sustained recovery.”

The roadmap on Oman forms part of a series of tailored reports which OBG is currently producing with its partners, alongside other highly relevant, go-to research tools, including a range of country-specific Growth and Recovery Outlook articles and interviews.