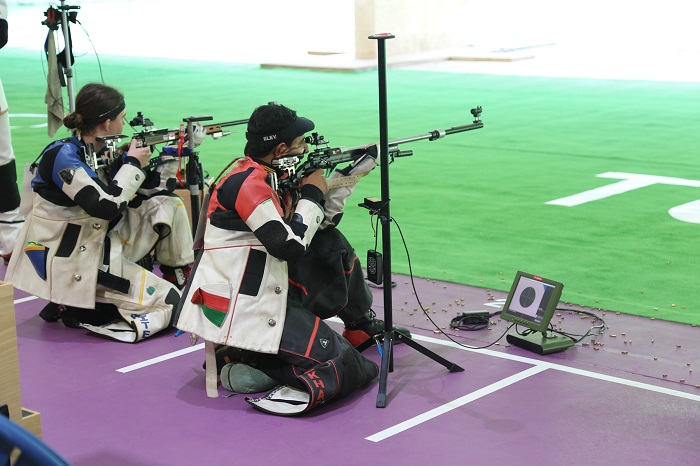 This is his second successive Games participation for Oman’s top shooter.

Arab’s Shooting Championship title holder had the official training session at Asaka Range on Sunday under the watchful eyes of the national coach Sultan Al Rushaidi.

Registering a new national record is the target for the Sultanate’s shooter. “I am pleased to be in Olympic Games for the second consecutive time after being in Rio Olympics 2016. Representing the nation in this showpiece event is a historic moment for any athlete and shooter. I am proud of myself to be here and I am looking forward for a good show this time. My goals in this Olympics is to break my personal best record and represent the country in a proper way,” he added.

Oman’s shooter Hamed will try to better his record and show the best performance in his second Olympic stint in Tokyo 2020 Olympic Games after his initial attendance in Rio Olympic Games in 2016.

The former flag bearer in Rio 2016 will surely strive to accomplish more points during his competition on Monday against world’s top ranking players in 50m Rifle competition.

Despite the tough competition expected, the 36-year-old will look for perfect display in the Olympic meet and achieve positive results.

The Sultanate’s shooting team has managed to raise the country’s flag very high in various regional, continental and globe participations in shooting events.

The team’s shooters had accomplished during the past years many glories including team’s achievement during Islamic Solidarity Games in Azerbaijan in 2017,  Gulf meets, Arabian shooting championships and the military sports events organised by CISM Council.

Oman Shooting Association (OSA), which was established in January 1984, is very keen on preparing and shaping all the national shooting team members for the top shooting events through providing proper training before the competitions.

OSA is working closely with the sports related entities to register the national shooters in the civil and military shooting events.

The 36-year-old Omani did the Sultanate proud last year when he became the champion of the Arab’s shooting Championship in Egypt in January 2020. He will compete along with 38 top shooters from different part of the world.

The qualification event will start at 6:30 am (Oman time) and eight shooters will advance to the finals which will begin at 11:50 am (Oman time). All the shooters will get 120 shot and distributed into 40 shots each for kneeling, prone and standing within a duration of one hour and 45 minutes. The existing record of Al Khatri is 1,176 point and he is holding the Arab record.