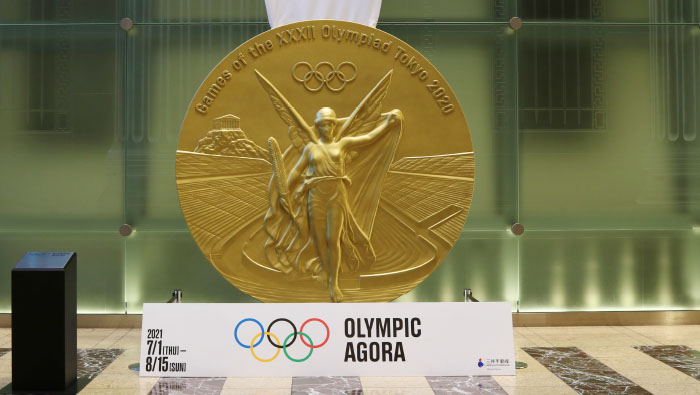 Tokyo: Only a select few of the athletes participating at the Tokyo 2020 Olympics have the luxury of being able to live off lucrative sponsorship deals. Here are some athletes who have had to find day jobs to make their Olympic dreams a reality.

1. Anna Kiesenhofer
(Austria, cycling,
mathematician)
Anna Kiesenhofer revealed she tapped into her mathematical prowess to help secure an unexpected gold medal in Tokyo women’s individual road race.
The 30-year-old Austrian finished the 137km course in 3 hours 52.45 minutes, more than a minute faster than Annemiek van Vleuten of the Netherlands, who claimed silver.
“As a mathematician, you’re used to solving problems on your own, so that’s the way I approach cycling,” she said in a television interview after her victory.
“Many cyclists are used to having people that actually do that for them [...] I mean, they have a trainer, they have a nutritionist, they have the guy that plans the race for them. I just do all these jobs myself.”
Kiesenhofer, who studied mathematics at the Technical University of Vienna and at the University of Cambridge, works as a postdoctoral fellow at the Ecole Polytechnique Federale de Lausanne.

2. Javad Foroughi (Iran, shooting, hospital nurse)
Nurse Javad Foroughi became Iran’s first gold medallist of the Tokyo Games when he won the men’s 10m air pistol event.
Competing in his first Olympics, the 41-year-old set an Olympic record of 244.8 points to finish ahead of Serbia’s Damir Mikec and China’s Pang Wei.
After his victory, Foroughi told journalists that he had resorted to practicing at home for months because of COVID-19 restrictions in his homeland.
He also explained that his training programme included long sessions with an air pistol in the basement of a Tehran hospital, where he works.
Iran’s media hailed him as a national hero for both his Olympic triumph and his efforts as a frontline healthcare worker.

3. Benjamin Savsek
(Slovenia, canoeing,
policeman)
Policeman Benjamin Savsek won Slovenia’s first-ever Olympic canoe slalom gold medal by dominating his rivals in the C1 final here.
The world No. 7 crossed the finish line in 98.25 seconds, 3.71 seconds ahead of silver medalist Lukas Rohan of the Czech Republic.
“I am really proud because in our discipline we have been waiting for this medal a long time,” Savsek told reporters after his victory.
Apart from working as a police officer, Savsek is also a qualified electrician.
In addition to his Olympic triumph, the 34-year-old’s list of achievements includes the 2017 world championship gold medal and six European titles.

4. Jo Brigden-Jones
(Australia, kayaking,
paramedic)
Australian Jo Brigden-Jones combines her kayaking career with a job as a paramedic.
“That medical side of things always interested me, and what I discovered I was passionate about - having an impact on your community,” she said during a break in her preparations for the women’s kayak four 500m on August 6. “I thought that being a paramedic would be a fun, exciting and rewarding job.”
The 33-year-old can certainly not be accused of being faint of heart. In addition to saving lives, Brigden-Jones revealed she trained for the Olympics by paddling in shark and crocodile-infested waters. “When you see a big splash you know it’s a shark down there,” she said.

5. Rosangela Santos
(Brazil, sprinting, driver)
Brazil’s Rosangela Santos worked as an Uber driver in the US to make ends meet as she prepared for her fourth Olympic Games.
The 30-year-old, who was a part of Brazil’s 4x100m relay team that took bronze at the Beijing 2008 Games, will compete in the 100m and 4x100m in Tokyo.
“In order to earn more tips, you have a chat with the passenger. I say that I am new in the city and they always ask me why I am here. I say that I’m training, that I’m a Brazilian athlete and that I won an Olympic medal!,” Santos told Brazilian news outlet GloboEsporte in 2019.
“It’s funny because they said, ‘Can I Google your name? Wow, that’s really you!’ And they ask for a picture.”
Santos will compete in both the 100m and 4x100m events at these Games.

6. Ruben Limardo
(Venezuela, fencing,
delivery rider)
Venezuela’s London 2012 foil gold medallist Ruben Limardo made food deliveries on his bicycle in Poland to earn a living as he trained for the Tokyo Games.
“You have to earn your way and this is a job like any other,” he said during an interview last year.
The 35-year-old was eliminated in the epee individual event here when he lost to France’s Romain Cannone in the round of 32 last Sunday (July 25).
Limardo began fencing at the age of seven and was originally right-handed before an injury prompted him to switch to his left side.

7. Benjamin Fletcher
(Ireland, judo,
horticulturist)
Irish judoka Benjamin Fletcher works at his family’s gardening business to support his judo career.
“I have to work to fund my Olympic dream. There are a lot of different expenses to pay for. Getting to tournaments, accommodation, flights, food. There’s a host of different jobs I could be doing [at the garden center]. I could be helping customers, stacking shelves, doing deliveries or even just manual labor, which I get roped into a lot,” the 29-year-old told the Olympic YouTube channel.
Fletcher, who switched nationality after representing Britain at the Rio 2016 Olympics, was eliminated in the Round of 32 in the men’s under-100kg category here on Thursday (July 29).