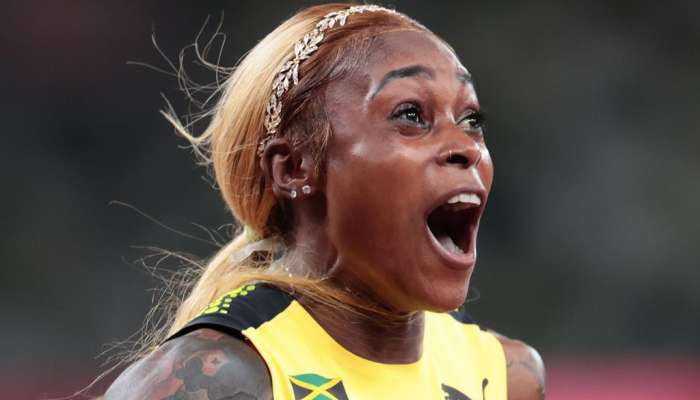 Tokyo: Elaine Thompson-Herah of Jamaica retained her crown as the fastest woman on earth while China's 37-year-old Lyu Xiaojun broke the record for oldest Olympic champion in weightlifting on Saturday.

Thompson-Herah set a new Olympic record of 10.61 seconds to win gold in the women's 100m as Jamaica swept the board. Her teammates Shelly-Ann Fraser-Pryce claimed silver in 10.74 and Shericka Jackson took bronze in 10.76.

"As a double Olympic champ to be in finals again - I was super nervous but I do train my body to control that. I know all of us were nervous," Thompson-Herah said afterwards. "It's a PB and an Olympic record so tonight is the best race."

At the end of Day 8, China tallied 21 gold medals and 46 overall to remain on the top of the medal table. The host nation is in second place with 17 golds and 30 in total, ahead of the United States which has 16 gold, 17 silver and 13 bronze.

Lyu won Olympic gold four days after his 37th birthday, breaking the record for oldest Olympic Games champion in weightlifting set by Rudolf Plukfelder of Russia, who was 36 years old when he won gold at Tokyo 1964.

The world record holder won the snatch discipline with a lift of 170kg, five kilograms more than his nearest challenger. A clean and jerk lift of 204kg gave him an overall winning total of 374kg. All are Olympic records.

"I really loved this weightlifting competition, and weightlifting itself. I think it is a beautiful art, that's maybe why I can take part for such a long time," said Lyu, who hasn't ruled out a chance of competing at the 2024 Paris Games.

Zacarias Bonnat Michel of the Dominican Republic bagged a silver with 367kg, the first Olympic medal in weightlifting for the country.

Despite a third-place finish that got Lu six points, the 24-year-old emerged winner of the 13 races with 36 net points.

Lu attributed the victory to excellent teamwork. "The medal race was tough, not only that we didn't have much wind, but also the struggle in myself, within me, about whether I could overcome and believe in myself that I could win," she said.

In the swiming pool, U.S. star Caeleb Dressel refreshed his own world record to win the men's 100m butterfly gold.

Touching home in 49.45 seconds, the two-time world champion of the event cut 0.05 seconds off his previous 49.50 mark to claim his third gold in Tokyo.

"It was faster than I thought it was going to be, which was great - it's fantastic for the sport," said a high-spirited Dressel.

Kaylee McKeown of Australia claimed her second title at the Tokyo Olympics in the women's 200m backstroke in two minutes and 04.68 seconds. World record holder Kathleen Ledecky of the United States added another gold to her collection, touching home in eight minutes and 12.57 seconds to win the women's 800m freestyle.

This is the fourth medal for Ledecky at Tokyo 2020, as the 24-year-old freestyle specialist had her first gold at Tokyo 2020 over the 1,500m distance following two silvers.

"This medal means a lot to me. I have competed in four Olympics and this medal is a dream come true. I didn't get the gold, but this result is very satisfying," said the four-time Olympian.

There was also disappointment for China's sports fans. The Chinese women's volleyball team failed to progress through the group phase despite their straight-set victory over Italy on Saturday.

With only one match left in the five-match preliminary round of the 12-team tournament, Lang Ping's side now has a 1-3 win-loss record and can't finish in top four in group play. The top four teams out of each six-team pool advance to the knockout stage.

Off the arena, two athletes and a coach from Trinidad and Tobago have been forced out of the Tokyo Olympics after testing positive for COVID-19 in the Olympic Village, and are now transferred and isolated in a hotel in Tokyo.