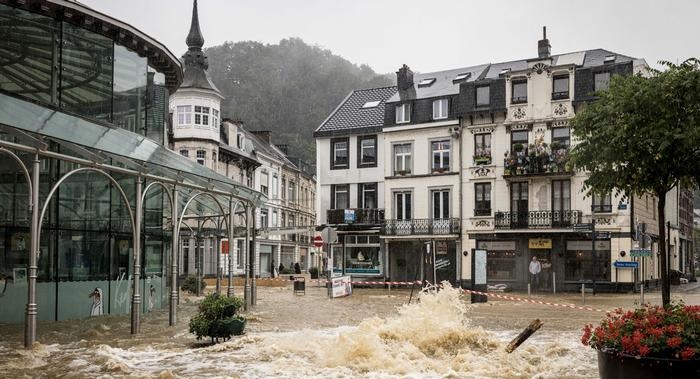 Belgian officials warned against all travel to the country's flood-ravaged regions as one of the country's leading newspapers reported that the death toll had risen to 23 nationwide.

Wallonia, Belgium's largely French-speaking region, is among one of the worst-affected areas where more than 21,000 people are currently without electricity.

"Avoid traveling to the affected provinces," the Belgian crisis center, which handles major emergencies, said in a statement.

"Many roads are flooded or dangerous. You could endanger yourself and/or hinder the work of the emergency services," the statement said.

The regions concerned are mainly in the south and east of Belgium.

"Yesterday [Thursday] evening, hundreds of people were still trapped in their homes," he said in an interview.

Paramedics, police and the military have been dispatched to those areas to help with rescue and evacuation operations.

Two towns east of Liege, Verviers and Pepinster were reported to be flooded, with houses collapsing and water rushing through town streets.

Authorities in the Belgian town of Maaseik, which borders the Netherlands, said the Meuse river had risen over a flood protection wall and sandbanks placed on top of it.

The high-speed Thalys train link between Belgium and Germany, which has borne the brunt of the floods, has been suspended until further notice.

Local authorities had called on Thursday afternoon for those living close to the banks of the nearby Meuse River to leave their homes.

What about the floods in Netherlands?


On Thursday, the Dutch Prime Minister Mark Rutte formally declared the province a national disaster zone as the Meuse and Rur rivers rose to record levels after heavy rainfall.

Dutch troops helped thousands of people to evacuate their homes in the southern Dutch province of Limburg. Aided by firefighters, they fought to reinforce dykes and place sandbags onto flood defenses.

Authorities evacuated 10,000 people from the city of Venlo, which borders North Rhine Westphalia, including 200 patients who were at a hospital.

The smaller town of Meerssen was also evacuated after emergency services revealed there was "a large hole in the dyke," although that was later repaired.

Rising water levels flooded the town centre of Valkenburg, by the Belgian and German border, forcing the evacuation of various nursing homes and the destruction of a bridge.

How have Luxembourg and Switzerland been affected?

Intense rain in Switzerland led the country’s weather service to warn that flooding would worsen in the coming days.

Forecasters predicted that there was a high risk of flooding on Lake Biel, Lake Thun and Lake Lucerne, adding that landslides remained a possibility.

Luxembourg airport was temporarily without fuel after a valve failed on its kerosene pipeline at the German side of the border. "The supply was restored in the late morning of July 16, 2021," the Luxembourg Ministry of Mobility said.