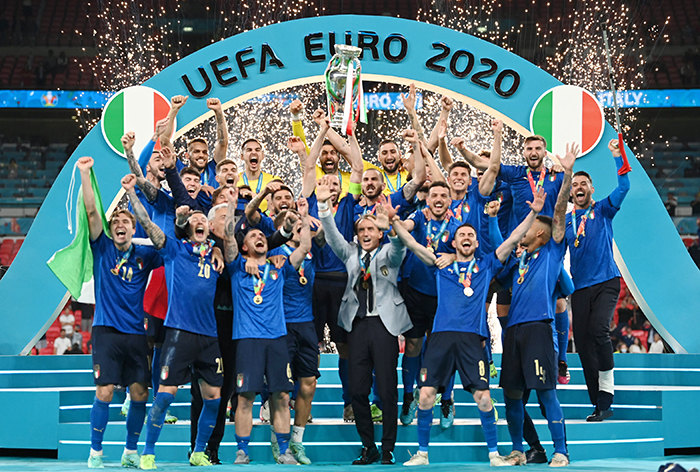 Europe's mightiest have had their go at each other for the past month and none other than Italy have come out on top winning the Euro cup for the first time since 1968. Going into the competition, the finalists weren't the favourites on the list of any reliable pundit but it really isn't easy to decide favourites before a tournament because football is an unpredictable sport as shown in this tournament.

The first match of the tournament saw a 3-0 win for Italy over Turkey. The Italian squad under Roberto Mancini has completely transformed from a team that football fans around the world saw as ‘finished’ to a team which is a serious contender for the 2022 world cup. Wales played Switzerland in the second game of the competition and it ended in a 1-1 draw. Lot of people saw Wales as a team that could go far in this competition continuing their form from 2016 where they reached the semi finals of the Euros but unfortunately they failed to make it past the round of 16. Denmark played Finland later the same night which saw Christian Eriksen fall flat to the ground due to a heart attack which he received mid game.

The whole of the stadium was in shock but the Danes stood strong and carried on the match which ended with Finland winning 1-0. The next few matches saw Belgium go past Russia with a 3-0 win while England defeated Croatia thanks to a Raheem Sterling finish. Austria eased past North Macedonia and the Dutch secured a last gasp win against Ukraine. The Czech Republic won against Scotland comfortably whereas Spain and Sweden took part in a goalless draw. Next to come were the matches from group-f, ‘The group of death’. Portugal defeated Hungary by scoring 3 goals in the dying moments and France scraped past Germany with a 1-0 victory thanks to a Mats Hummels own goal.

After a solid 2 weeks of group stage action, the knockout matches had begun with Wales taking on Denmark. The Danes won by a 4 goal margin and qualified to the quarters. At this point everyone saw Denmark as the underdogs. Italy, continuing their fine form, defeated Austria 2-1 while Czech Republic shocked the Dutch by knocking them out earlier than expected. Defending champions Portugal had to exit early after a loss at the hands of the red devils. Spain defeated Croatia in a nerve racking match that turned out to be a goal fest while the world champions France had a premature end to their campaign courtesy of the Swiss.

The quarter finals saw Switzerland lose to Spain on penalties while Italy eased past Belgium with a 2-1 win. Underdogs Denmark continued their incredible journey by defeating Czech Republic 2-1 and England reached the semis with a comfortable 4-0 win over Ukraine.

The dying stages of the tournament had begun and it started with the Spaniards taking on the Italians. The game was tied at 1-1 thanks to a late equalizer from Spain which forced the match into penalties where Italy emerged victorious making it their second final appearance in the last three Euros.

England faced Denmark which started with Mikel Damsgaard scoring a long range free kick and taking the Danes into the lead. Not long after, Simon Kjaer turned the ball into his own net which got England back on level terms. The game stayed at 1-1 for the 90 minutes forcing it into extra time where Raheem Sterling won a penalty. Schmeichel,saved the penalty but couldn't hold on to the ball and Harry Kane capitalised sending England to their first final since 1966.

The chants of ‘It’s coming home’ had begun and the Italian spirits were higher than ever. All was to play for in Wembley when the two best of Europe took on each other. A young English squad up against an experienced and unbeaten Italian side.

The whistle blew and the game was underway. In no time England were in the Italian half and looking threatening with Kieran Trippier on the ball who played a cross to the far post perfectly set up for Luke Shaw on the half volley who didn’t miss his opportunity and put England ahead in the second minute of the game.

Wembley and the whole of England was ecstatic but Italy ruined the party in the 67th minute when Leonardo Bonucci equalised. The game stayed level for 90 minutes and nothing changed in extra time. The last time Italy were in the Euro finals they lost on penalties, but this time they turned the tide in their favour and defeated England in their home ground to lift Euro 2020.

Italy are the champions of Europe. Football went to Rome.