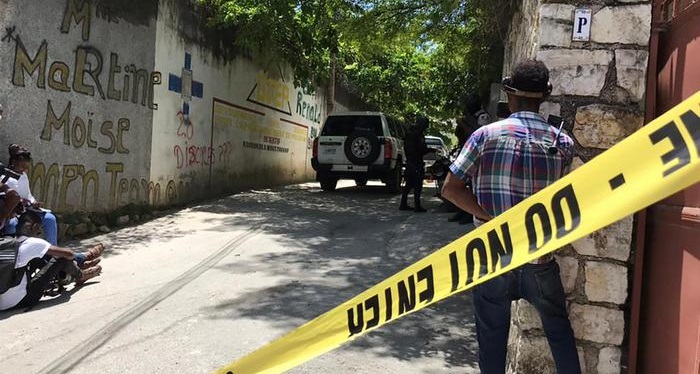 While uncertainty reigns Haiti's political future, confusion still surrounds the circumstances of the killing of Moise.

Police said they arrested 18 Colombians and three Haitians, including two who also hold dual US citizenship, linked to the July 7 killing.

A Florida-based Haitian doctor, who was also arrested, is believed to have led the group, according to police.

Who are the newly identified suspects?


Police on Tuesday said they were searching for a former official, a former senator and a former businessman. Authorities believe they are "armed and dangerous."

The former official, Joseph Felix Badio, has worked for the Justice Ministry and the government's Anti-Corruption Unit (ULCC).

Following the announcement, ULCC said in a press statement that he had been fired in May over "serious breaches" of ethical rules.

"This villainous act is an affront to our democracy,'' ULCC said. "The authors, co-authors, accomplices must be hunted down, investigated and punished with the utmost rigor."

The third suspect, Rodolphe Jaar — also known as "Whiskey" — is a Haitian businessman who was previously indicted by US federal prosecutors for allegedly conspiring with others to distribute cocaine in the US.

According to the Associated Press, his attorney told a US court in 2015 that his client had been a confidential source for the US government for several years before his indictment.

The three are accused of assassination, attempted murder and armed robbery.

What is the situation in Haiti?


Besides the Moise assassination criminal probe, the Haitian government is also trying to organize a national funeral for the slain president.

"The government currently has two priorities: pursuing the investigation to give justice to the president's family and organizing a national funeral for the president," said Haiti's interim prime minister, Claude Joseph, whose legitimacy as the executive head of government in Haiti is questioned by the opposition.

Any funeral ceremonies would be organized "in agreement with the president's wife," Joseph said. Martine Moise was wounded in the shooting that killed her husband.

Joseph said the ongoing criminal investigation was a "very sensitive" matter. "We have to take a lot of precautions," he said.

Facing turmoil triggered by Moise's killing, the acting prime minister has requested troops from the US and the United Nations to help guard key infrastructure.

The group slammed the lack of "patriotic" planning by the interim government, which it accused of opting "to rush into the ease of a request for intervention on national territory," according to a statement cited by Reuters news agency.