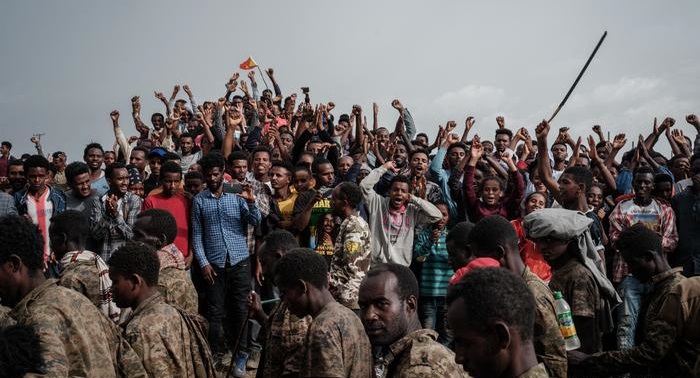 The UN's rights council on Tuesday called for an end to the conflict in Ethiopia's Tigray region and urged Eritrean troops to pull out of the area.

Officials at the Geneva-based Human Rights Council signed off on an EU-backed resolution earlier.

It demanded "an immediate halt to all human rights violations and abuses and violations of international humanitarian law" in the war-torn area.

His move was backed by Eritrean troops, and the UN's resolution also called for their "swift and verifiable withdrawal."

They are accused of taking part in rights abuses, including killing civilians and forcing Eritrean refugees back across the border.

What did diplomats in Geneva say?


Before the vote, Eritrea's representative to UNHCR, Adem Osman Idris, criticized the resolution, insisting that his country's troops had left the region.

Until as recently as March, both Ethiopia and Eritrea denied the Eritrean army was ever involved.

Anita Pipan of Slovenia, who presented the resolution on behalf of the EU, said an independent investigation was needed into the alleged atrocities in Tigray.

"For the process to be credible, transparency is needed," she said. "Given the seriousness of the situation, the international community has the right to be kept informed."

Ethiopia rejected the resolution, but has agreed to cooperate with a probe carried out by the office of UN rights chief Michele Bachelet.


A spokesman for the Tigrayan rebel forces told the AFP news agency that they had seized Alamata, the main town in southern Tigray.

But the claims could not be independently verified and the Ethiopian military is yet to comment on them.

What is the background to the conflict?


The months of fighting has left thousands dead and has pushed an estimated 350,000 people towards famine.

Several thousand have also decided to flee across the border into neighboring Sudan.

The TPLF was once the dominant political power in Ethiopia until Abiy took office in 2018.

Abiy's ruling Prosperity Party on Saturday was declared as the landslide winner of last month's national election, assuring him a second five-year term as premier.

No voting took place in Tigray and dozens of seats will remain vacant after one-fifth of constituencies failed to vote due to ongoing unrest.

In May, the EU canceled an election observation mission after the government refused to provide a series of reassurances to be able to carry out their work.

Popular opposition parties in the Oromia region, the largest of Ethiopia's federal states, boycotted the election over alleged irregularities, while the United States branded the vote as "significantly flawed."

Abiy's new government is expected to be formed in October.