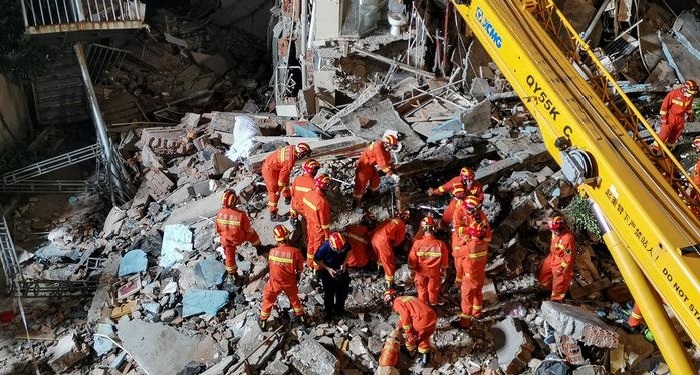 The collapse of a hotel in the Chinese city of Suzhou left at least eight people dead and nine others missing, local authorities said Tuesday.

The hotel had collapsed on Monday afternoon.


Rescue workers rushed to the now-destroyed budget Siji Kaiyuan hotel and pulled at least seven survivors from the rubble. More than 600 emergency personnel and 120 vehicles mobilized for the rescue operation.

Cranes, ladders and other equipment, along with rescue dogs, were used to find those trapped under the rubble.

Nearly two dozen people in total were reportedly trapped under the debris. Most of the people in the building during the time of the collapse were hotel guests.

Building catastrophes not uncommon in China


The cause of the collapse is still unclear and authorities are conducting an investigation into the incident.

Building disasters and other similar catastrophes are not uncommon in China, due to uneven regulations.

A fire broke out at a martial arts training center in China's Henan province last month, killing at least 18 people.

A hotel collapse in the southern city of Qanzhou killed 29 people in March. Three floors had been added to the building illegally.