Top US general in Afghanistan hands over command on exit 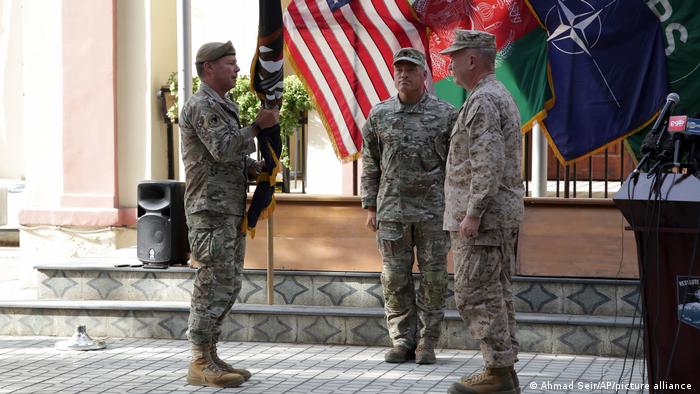 Miller, a four-star general who has led US troops in the country since 2018, handed over command to Marine General Frank McKenzie, the head of US Central Command (CENTCOM).

McKenzie, also a four-star general, will run US operations from CENTCOM headquarters in Tampa, Florida. In that capacity, he will have the authority to conduct US airstrikes until at least August 31, when the last US troops are scheduled to leave the country.

The US military's mission to protect its remaining diplomatic presence in the country, as well as defending Kabul's airport, will fall to a two-star admiral stationed in the capital.

News of Miller's departure came as the militant Islamist Taliban continued to gain territory across Afghanistan. The group is thought to control more than one-third of the country, and it claims a far greater level of control.

The Taliban has overrun a large number of rural areas of late, gaining control of strategic territory along Afghanistan's borders with Iran, Uzbekistan and Tajikistan.

Though the US- and NATO-funded Afghanistan National Defense and Security Forces (ANDSF) have put up resistance at times, the military largely appears to be abandoning the fight.

Miller's handover and his scheduled departure from Afghanistan later Monday are the latest steps in the final withdrawal of US troops from the country.

Nicknamed the "forever war" by some in the US, the conflict began when the US invaded Afghanistan on October 7, 2001, ostensibly to remove the Taliban from control after the group refused to hand over Osama bin Laden and other members of the Islamist terror outfit al-Qaida, which the US said was responsible for attacks on the US on September 11, 2001.

The conflict went on to become the longest war in US history.